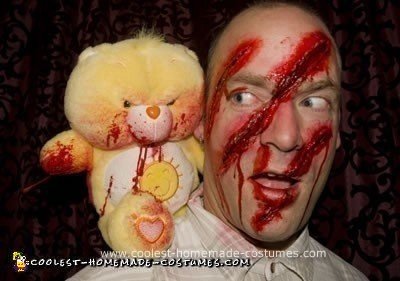 I came up with this idea for a spooky Halloween costume after making a gash on my face for another party. I really wanted to do a few gashes and make them look like a bear attack. For Halloween what would be better than a bear attack…a feral Care Bear Attack, yes.

The gashes are toilet paper and liquid latex, with grease paint and fake blood. Yes, as simple as that. The clothes were old and unworn. The shirt and pants were light enough to see blood on, so I made bloody paw prints where the bears had climbed me. I used acrylic paint and epoxy colored with red acrylic to paint the blood so that I wouldn’t get red on every piece of furniture that I touched. Above every paw print I slashed small claw marks into the clothes.

The bears were real Care Bears that I set free into the wild and which became feral. I used heavy fishing line to stitch their foreheads to their snouts, giving them that angry look. I also pinned their ears back with a stitch. Just these two things changed the character of the bears instantly. No longer friendly, but still cuddly, it was time for some blood.

I used red acrylic paint to douse them in blood. I dry brushed most of the blood so the paint was only on the tips of the fur. I used epoxy mixed with the same paint for a more wet looking blood. The dripping blood on their faces is also epoxy but with fishing line inside to give it structure until the epoxy dried. The blood flinging on the paw is hot glue, painted.

It was short on time so the bears spent a lot of time in the oven, on low, to get the epoxy and paint to cure. I was kind of weird opening the oven and seeing a pissed off Care Bear covered in blood looking back at me. Again this blood did not transfer when it was touched.

Each bear was attached to the shirt and pants with the same fishing line used for their faces. Further stitches helped position the bear’s bodies in the proper positions. For example I stitched the yellow bear’s arm to his cheek to get it raised.

The makeup held up to a night of bar hopping, with only the gash on my lower lip peeling up. I knew that this might be a problem because of the constant flexing as I talked and drank. I brought the little bottle of liquid latex with me and a couple of dabs under the gash secured it for a few more hours. 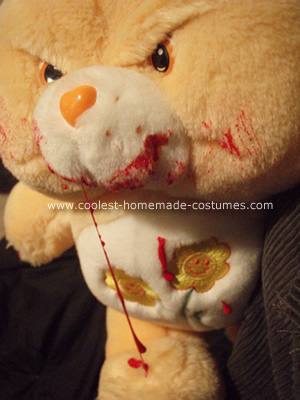 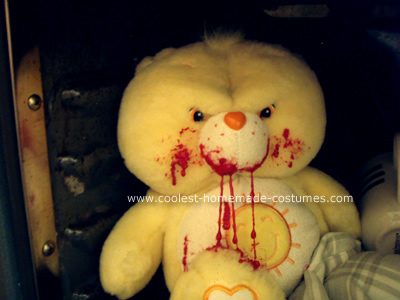 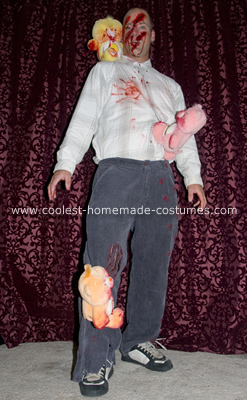