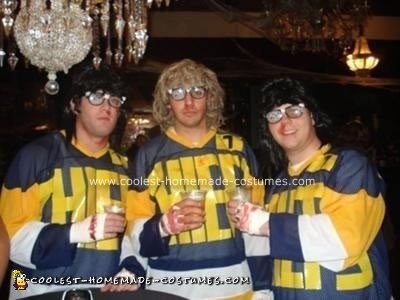 Every year we attend this Halloween party down in Newport RI which is the best party I have ever been to and I recommend it to anyone reading this. You can contact the Belcourt Castle to get tickets. I have never seen so many people take the time to make the best costumes ever. We wanted to come up with something creative to hopefully win some of the prizes that com along with attending this party and The Hanson Brothers from SLAPHOT, the movie, I thought was a very creative idea.

After deciding this Slapshot Costume is what we would be it came upon the news that Paul Newman had passed away and for those of you that know Slapshot, the movie, Paul Newman was a key character and after his passing we thought that we had to pay tribute to him by putting his # 7 over our hearts on our homemade jerseys. This was the greatest idea, people loved this costume.

The judges on the other hand clearly didn’t know about Slaphot or Paul Newman so we didn’t take home any prizes but to say the least were proud to represent the Hanson Brothers From Slapshot.