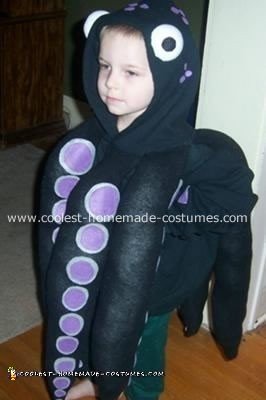 My son wanted a giant octopus costume for Halloween. I started with a hooded sweatshirt. I used three pairs of ladies heavy tights for the tentacles. I cut both ends of the tights and sewed one end of each tentacle to a point.

I then stuffed each tight with stuffing. Next I cut out suckers for each tentacle making them larger at the base and smaller to the end. I used a glue gun to attach the suckers. I then sewed each tentacle around the hood of the sweatshirt, three on the front and three in the back. Each of the arms of the sweatshirt are tentacles too so I glued suckers to them also.