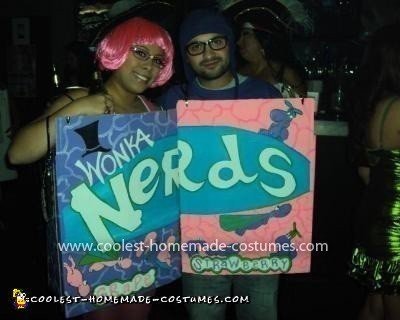 I saw the Nerds costume featured on this website but I did another design of a nerd’s box that I found. I bought 2 large moving boxes at Wal-Mart $1.72 each and craft paint, .77 cents each bottle (electric pink, white, electric teal, lime, black and lavender )at Hobby Lobby.

I drew everything on the box as a whole, painted in the details first before painting the whole box, and then I cut it with a box cutter in to two separate pieces. With the flaps I cut off the box, I used those as the sides since they were shorter and allow more space for our arms.

I put the boxes together with pink and purple duct tape since it is very durable and allowed us to flatten the boxes while we were in the car. I also lined the top of the box in the inside with duct tape so that it would be like a reinforcement for the holes I made with a hole puncher to hang the ribbon on our shoulders.

To complete the Homemade Nerds Couple Costume I bought a pink wig at Wal-Mart for 5 bucks, pink tights at Forever 21 for 3.50 and glasses for a $1.00 at Dollar tree. My boyfriend happened to find a purple nerd t-shirt that said “who let the nerds out” for $7.00 bucks and topped it off with a $4.00 beanie also from Wal-Mart.

All together we spent about 30.00 bucks to put the whole thing together but it was all worth it. The costume was a huge hit; we got so many compliments and pictures taken of us. 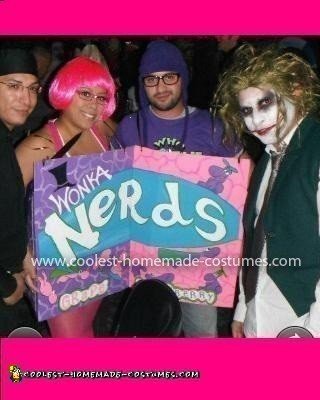