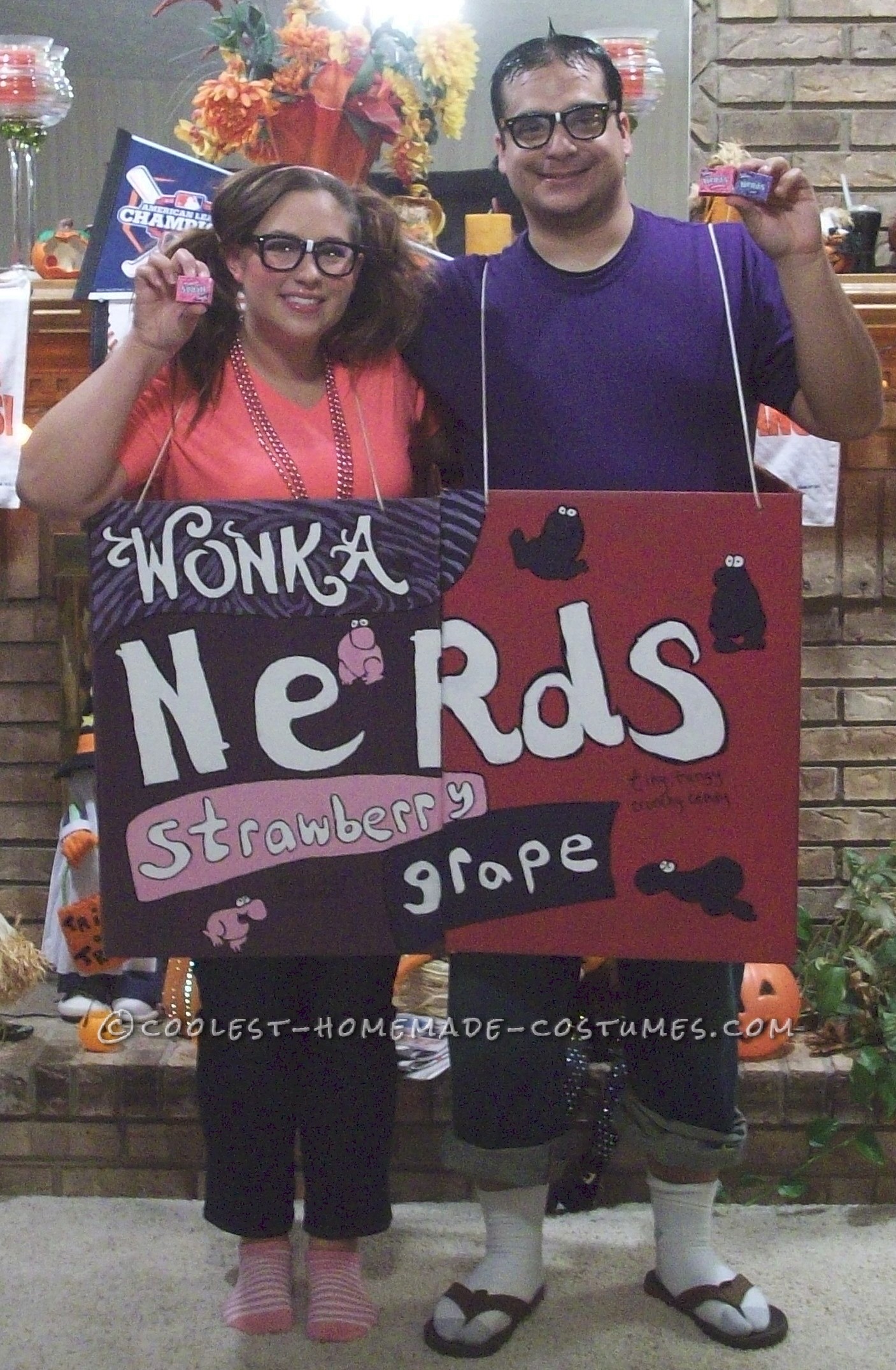 My fiance and I wanted to do a couple costume, but wanted something funny, creative, and unexpected. We both love Willy Wonka Nerds Candy and thought what better way to actually be Nerds Candy. We bought the following materials, 2 cardboard boxes, 4 cans of spray paint, 4 normal paint, string, and accessories to dress … Read more 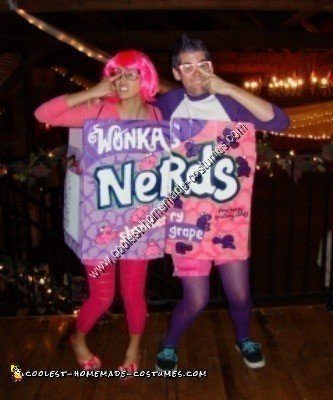 I created this Nerds Box Costume for a big event we throw at school every year called, the barn dance. It’s apart of TWIRP week which is a week full of events where the girls ask the guys to pre-planned events. At the barn dance everyone dresses up as a couple, and at the end … Read more 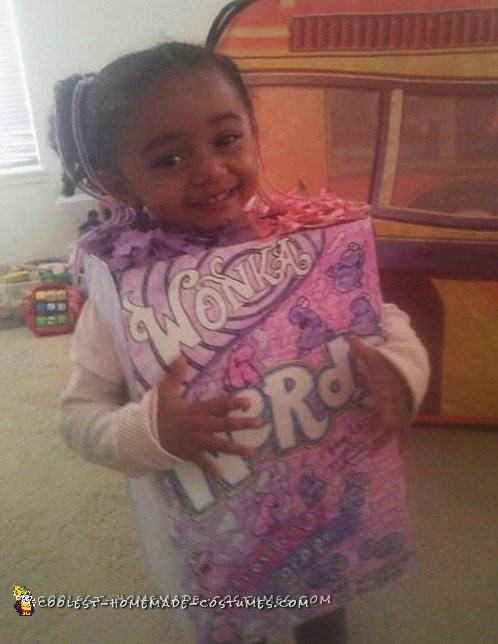 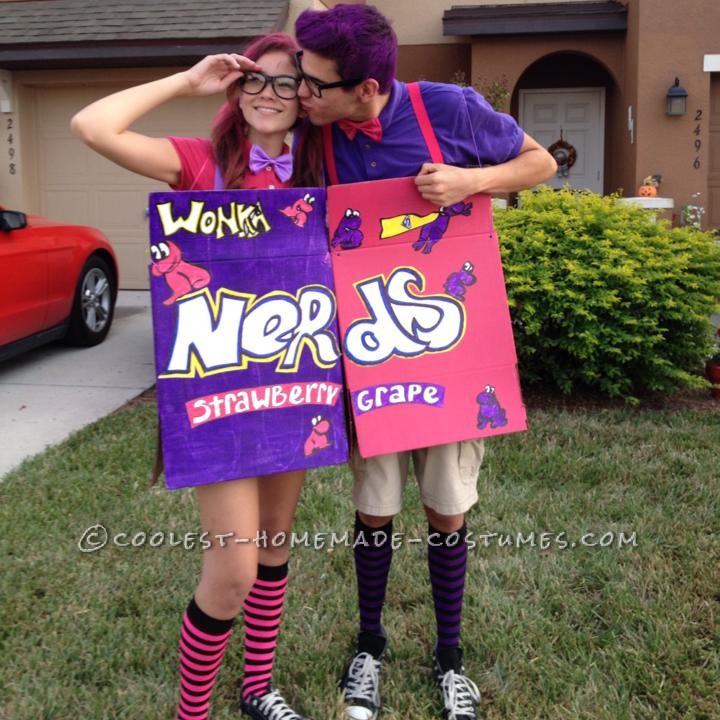 Before we decided on this Nerds couple costume, my boyfriend and I sat for the longest time trying to think of a costume that we thought would stand out. Finally, he said it. “Why don’t we be Nerds boxes?” I thought he was joking at first, but after a while, I could see the idea in … Read more 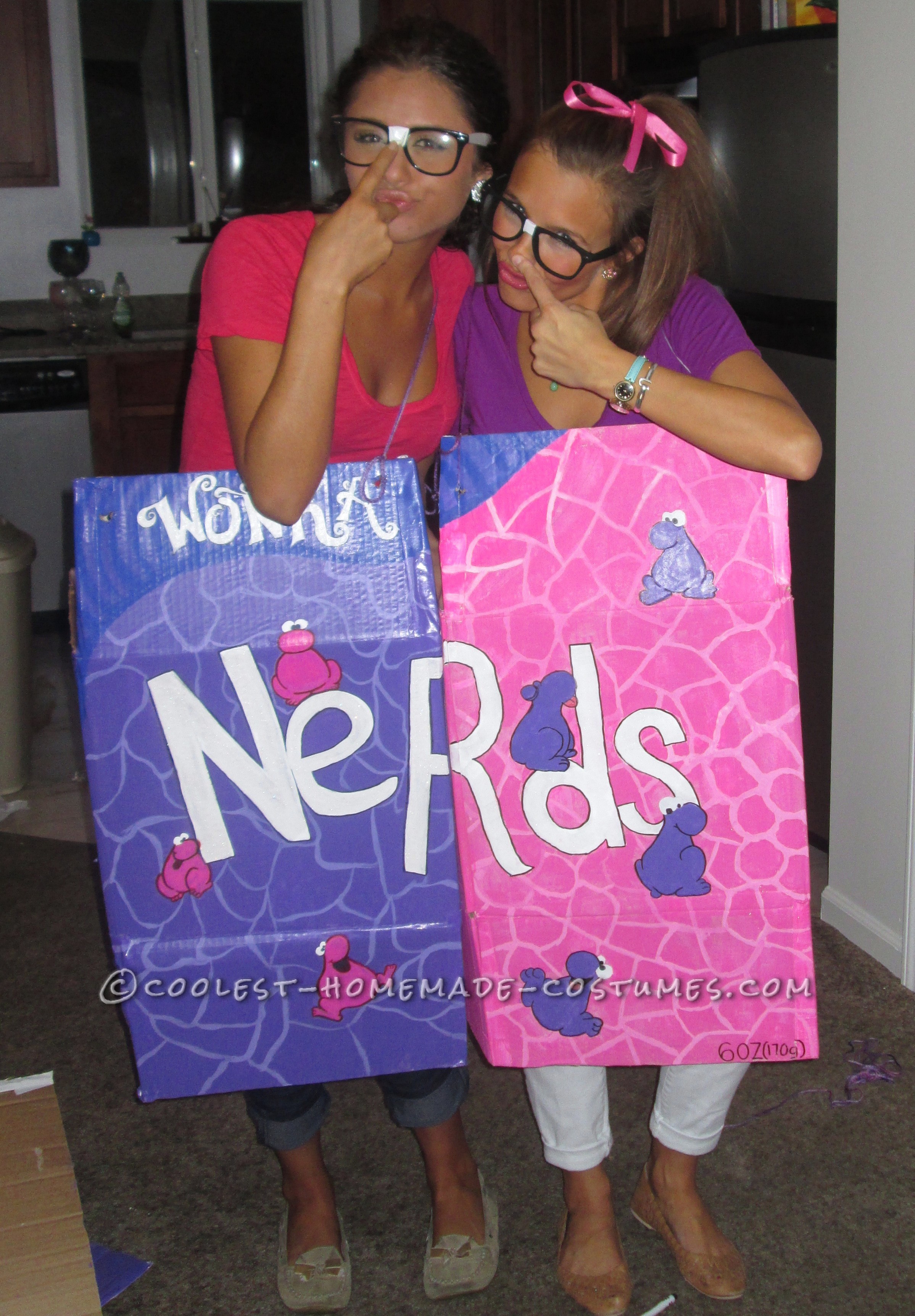 My friend and I took two big boxes and first spray painted them white, then painted each box accordingly to a nerd box. her half was the pink side and my half was the purple side. we painted them so when we stood together they matched as one. on the side we wrote ingredients and … Read more 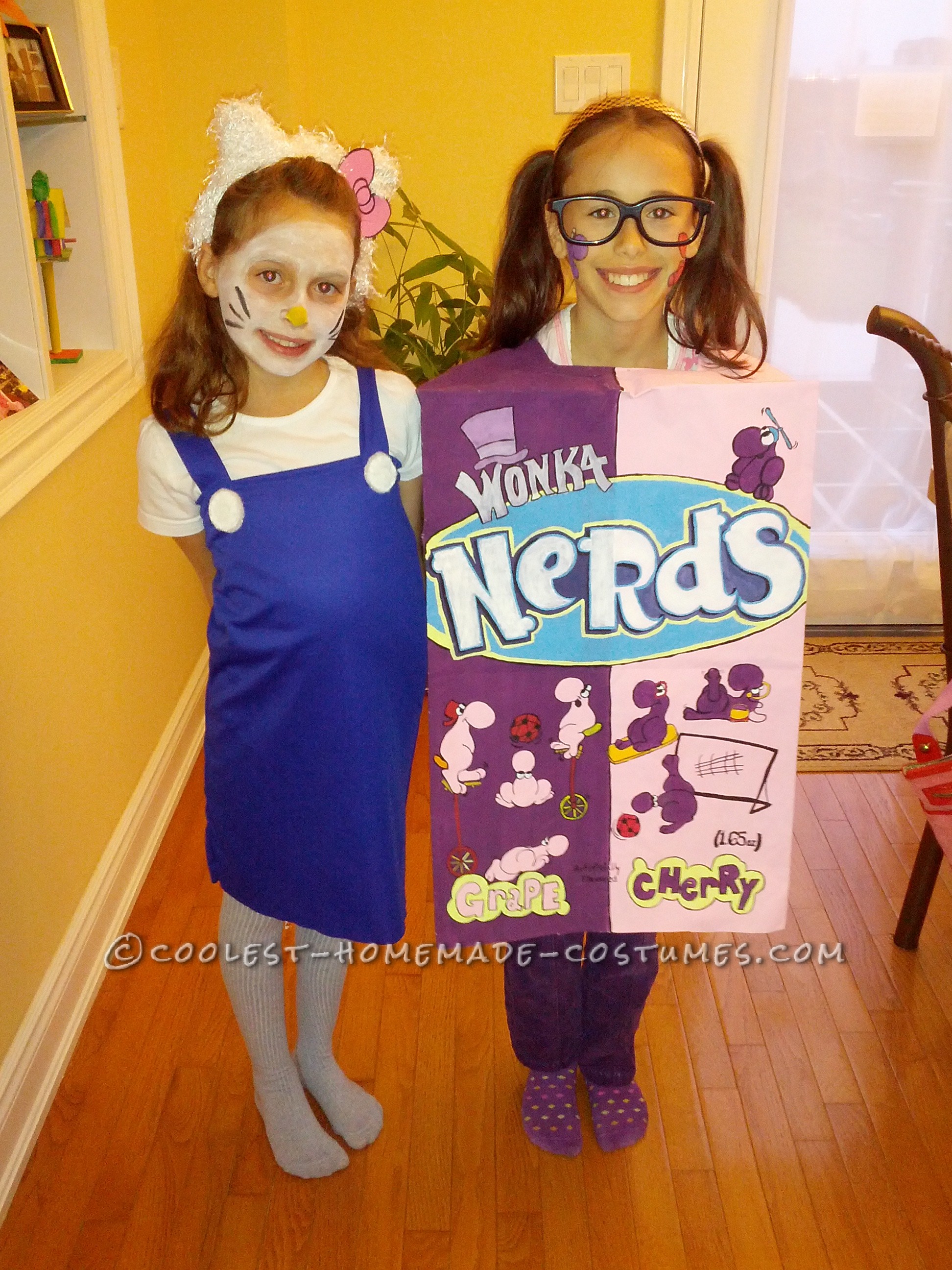 Candy anyone?? My daughters wanted to be Hello Kitty and a Nerds Box one Halloween. Always a challenge with these girls! Hello Kitty Costume The Hello Kitty was easy. Took me a few hours. I had some old blue fabric which I sized to her body. Sewed it together…nothing fancy, just straight stitch. I glued … Read more 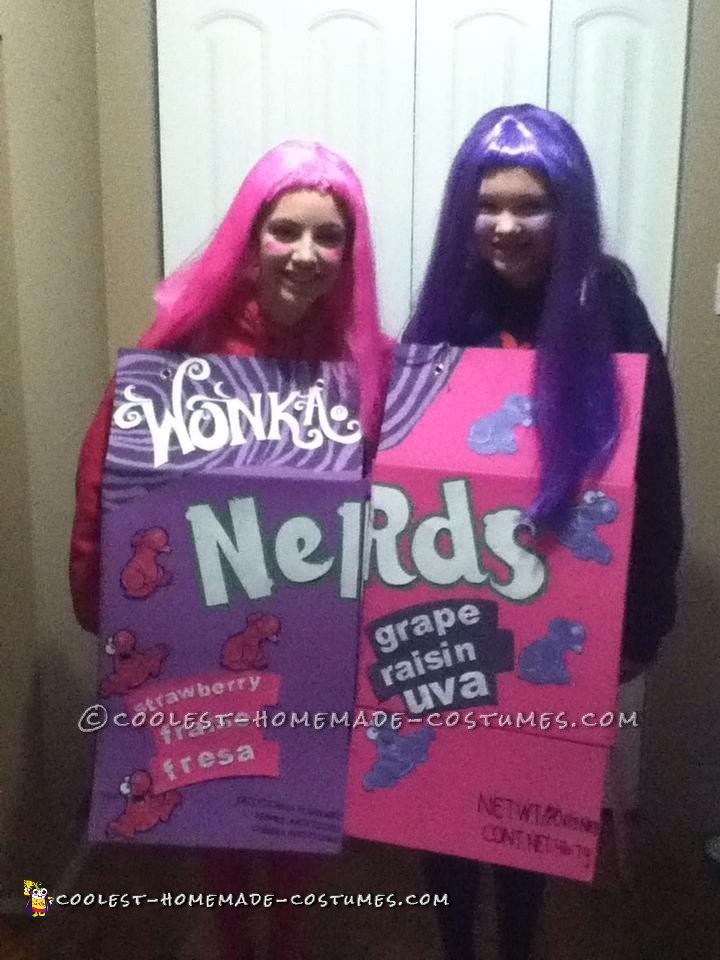 So, first off we bought 2 boxes and paint. we painted the box exactly like the real box of nerds, pink on one side and purple on the other. It took us a while for the paint to dry. After that we had white cardbord to cut out the nerds letter, the nurtition facts and … Read more 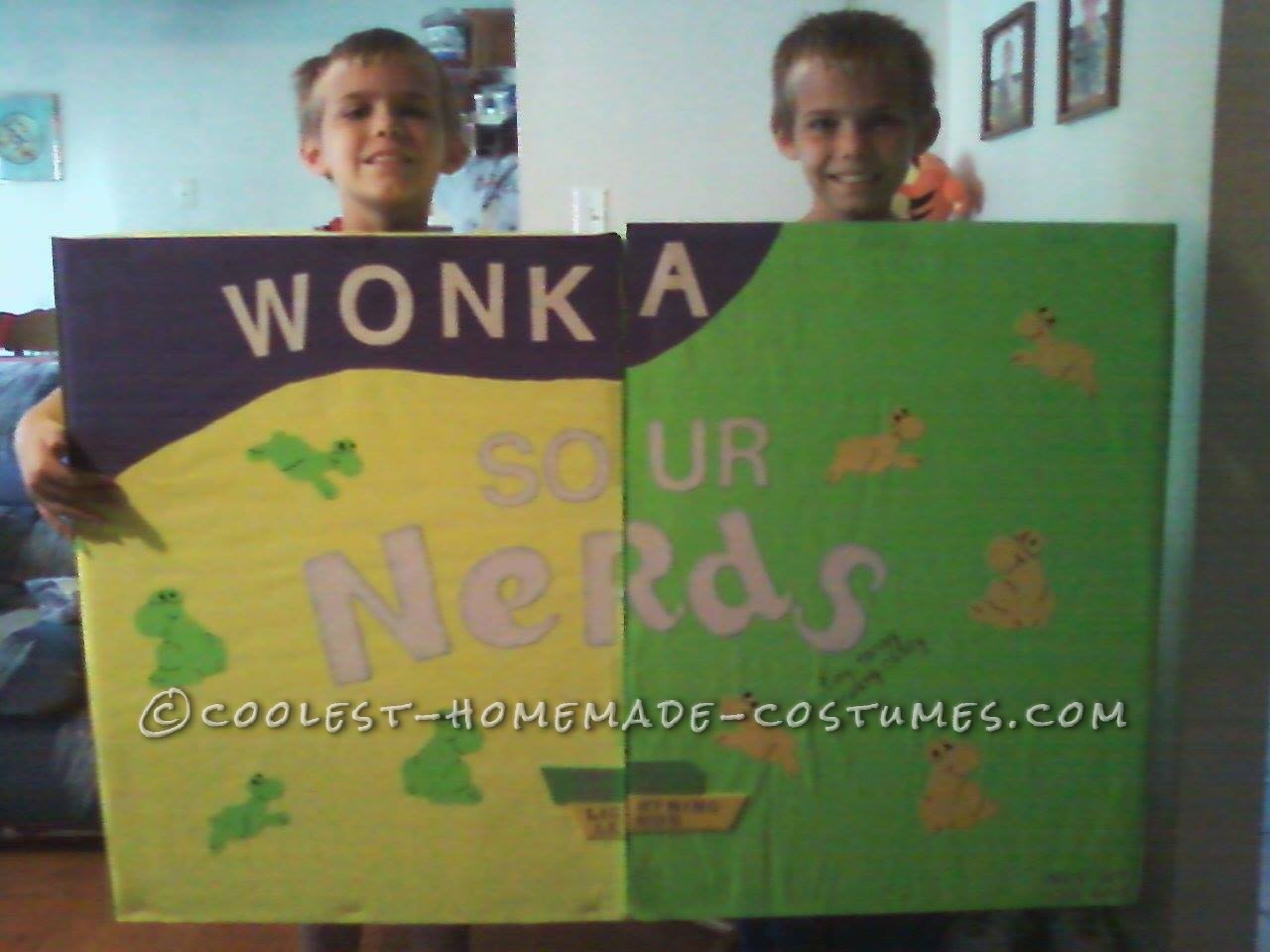 Well the boys and I came up with this idea together after about 2 days of  brain storming. We picked Sour Nerds because of the color (not girly pink/purple). Once we had decided on what they’d be I went on-line and downloaded an image of an actual Sour Nerds Candy box. We wanted it to … Read more 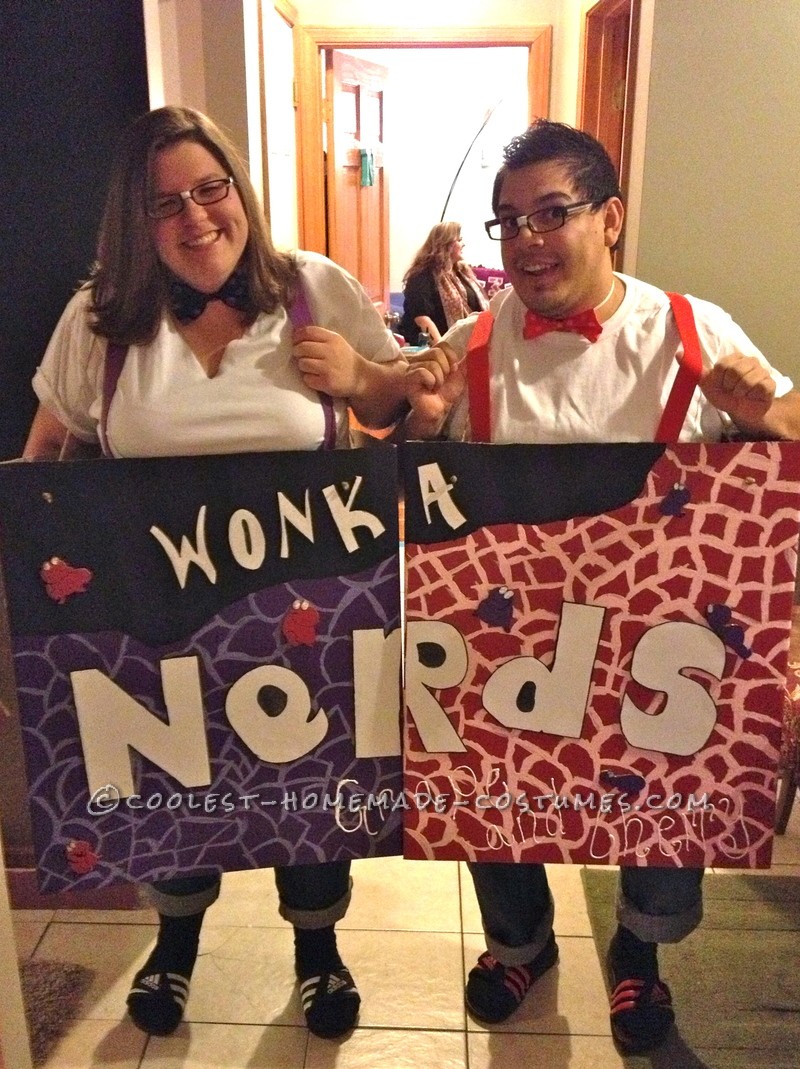 We took two tri-fold presentation boards, 1 red, 1 purple and painted the background with the design of a traditional Nerds box.  We then took a darker shade of purple and black and created the Wonka background to the logo.  We free-handed it with stripes diagonally across the grape box and partially across the cherry … Read more 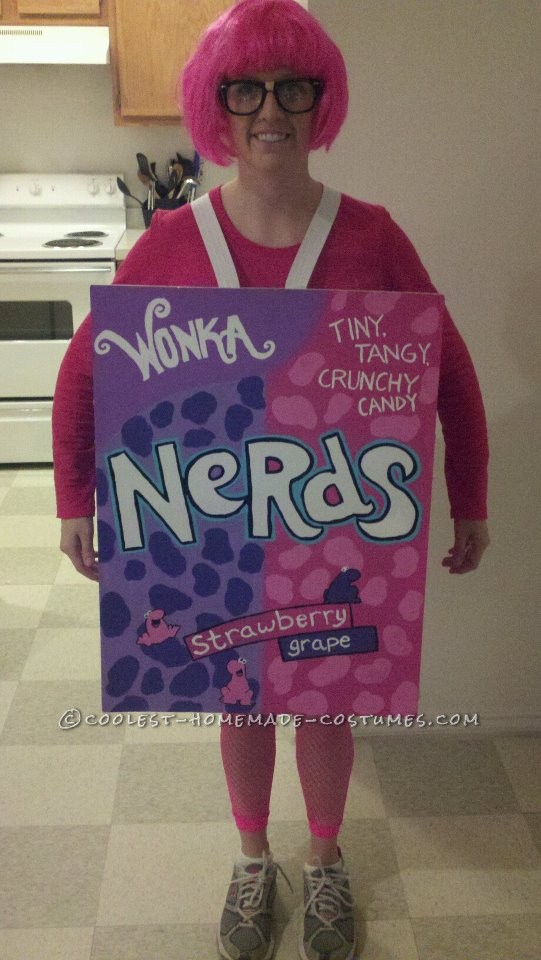 This Nerdy Nerd costumes is made out of foam board, about 3 large pieces. The foam board is hand painted using acrylic paint.  The straps are elastic bands that are hot glued to the front and back of the foam board. The sides of the box are put together with hot glue and duct tape. … Read more 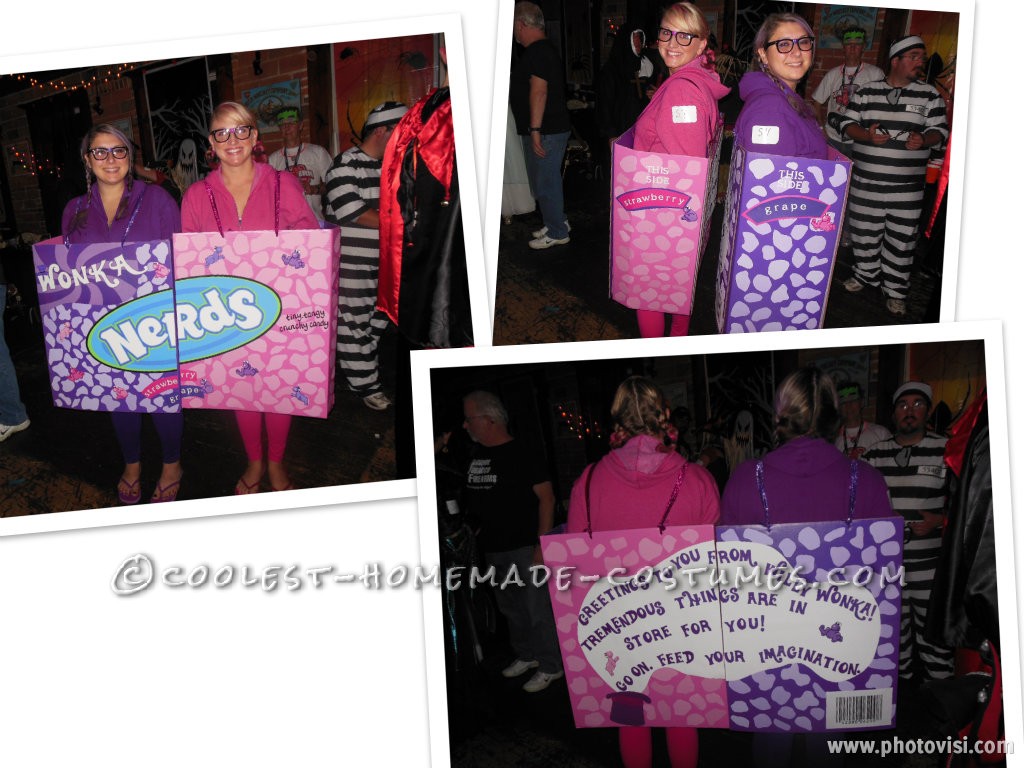 A friend and I wanted to do something creative this year for Halloween and we also refuse to pay sixty bucks for costumes that barely cover us! So, we searched around a bit and decided to create the Wonka Nerds candy boxes and wear them as our costume. It took a few trips to Hobby … Read more 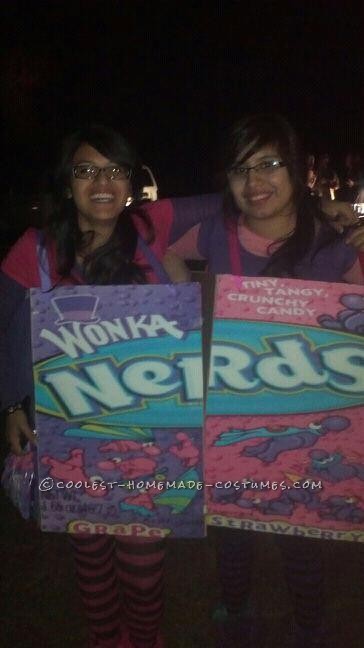 For Halloween my best friend and I decided that we would make our own costume! We were not sure what to make at all!! This would be the first time that we would make it ourselves.  I searched online but all I could find were sites selling already made costumes until I found this page! … Read more