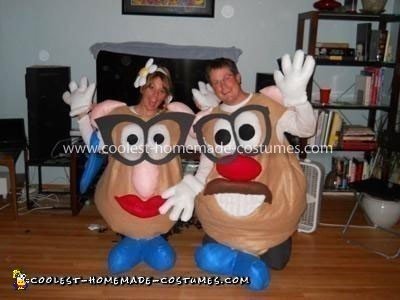 I made the felt bodies out of a bubble bee costume pattern I bought from Joann’s Fabric. The pattern is made out of a panel system in order to get the curvy plump bodies. I threw away the back side of the pattern as it had a large stinger. Making the front panels twice worked out well. The Mr. and Mrs. Potato Head Couple Homemade Costume have an inner lining and were stuffed with reused packing peanuts. The eyes, nose, hands, etc were all hand drawn, stuffed with batting and sewn. Each detachable piece had a front and back, I sewed around the edges completely then sliced a small hole on one of the panels, turned the piece inside out and stuffed them and then hand sewed the hole I made shut. I then sewed a large piece of Velcro over it.

The hands were also fun to make, I stuffed them and then sewed elastic to the side that would be touching the back of my hand. (The hands are turned around in the picture, but was normally worn the other way in order to still use my hands and eat and drink throughout the night). I decided not to make a large hat that covered my face, so I made a flower headband similar to one someone else on this site had. It worked well. We made a top hat for Mr. Potato head that covered his face (had holes for eyes). But it wasn’t worn the entire night. The hat was made out of a large cardstock poster board, taped to make the top hat part and then tabbed to the brim and then covered in felt. Glasses were made out of foam core.

Once we were done making the essentials we went over board and made detachables that we could switch out later in the night. For example: Goblins ears, vampire teeth, witches noes, a gangsta grill for Mr. Potato Heads smile, Michael Jackson hand, etc. They were a lot of work to make but even more fun to wear!