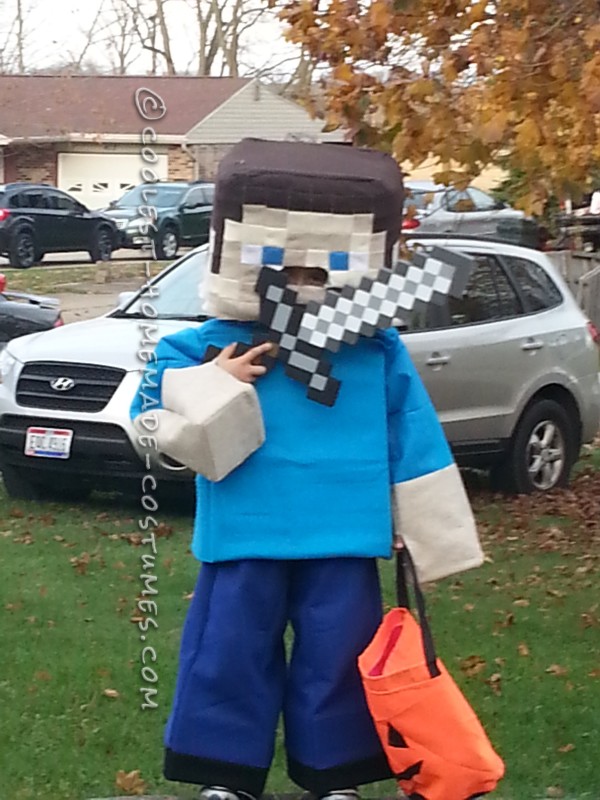 My son, like 99.9% of all 7 year old boys absolutely loves Minecraft. So naturally this year, he just HAD to be Steve. Since I’m also a little obsessive about making his costume each year, I had to oblige…

Now no store bought Steve head would do. I wanted something that could survive a couple Halloween parties and Trick or Treat, not to mention playing dress up or use at his birthday party in March, which he also wants to be Minecraft themed.

I started out with getting felt in the appropriate Steve colors. A couple of nice sturdy boxes and some foam  and a store bought iron sword round out the materials needed.

I originally thought I’d just make the head and have him “wear” a box with an aqua t shirt as the body. However a trial run at a cub scout Halloween party demonstrated that would never work for Trick or Treat. The poor kid could could barely move and fell more than he was upright that night. He ended up just wearing the head most of the night.

Fast forward to the final design and I ended up cutting rectangles of felt in the appropriate scale for my little guy. I “doubled” the felt to make pockets that rectangular pieces of cardboard could be slid into  the front, back, and sides to help define the recognisable squared Steve shape. But for the arms and legs,  I only put about 6″ squares of cardboard, just enough for the arms and legs to keep squared. The rest was just felt so he was free to run and move.

For the head I cut numerous squares of felt with my rotary cutter and pieced  them together leaving the space where Steve’s nose would be blank so kiddo could see out from his box head.  Being it was large and boxy and wobbled like crazy. Thus I had to find something to stabilize the head and cut rectangles of foam out and placed them strategically in the box.

It turned out sooo much better than I thought it would. Definitely my favorite costume thus far. You really have to see the video of him running in it to see how well it “worked” in action. Kids LOVED his costume as we were out trick or treating. He was getting high fives and asked about his costume all night. Definitely worth the hard work. 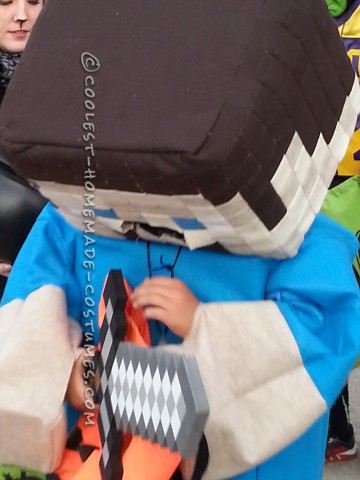 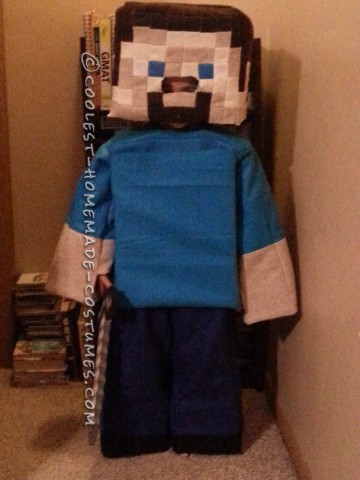