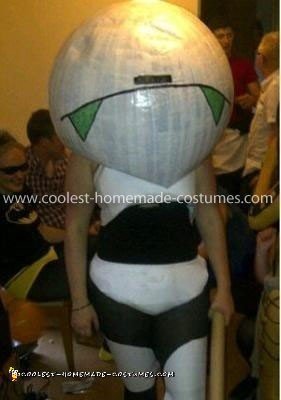 The idea for this Marvin the Paranoid Android Costume was a friend’s leave/birthday party so had a sci-fi themed fancy dress so I decided because my friends LOVES!! Hitchhikers guide to the galaxy that Marvin the Paranoid Android would be a perfect costume. I searched online for other costumes expecting to find one but couldn’t find any so decided to risk it and make it off my own back.

The head was made from paper macheing a gym ball with newspaper (Tip: if you clingfilm the ball first it is easier to remove the ball from the inside as clingfilm peels away easily). I put as many layer as could manage in my limited time frame and left it to dry for 24 hours before covering with white gaffer tape. The original plan was to paint it but the gaffer tape gave a really good shiny finish so when for that instead. Over 2 rolls later I was able to draw on the face using permeanant markers and deflate the ball.

The top was made from cutting a vest top and stapling some strong paper to the inside to give ridgity to the look and make it look more like amour on a robot. The middle was a pair of very high waisted control pants and the bottom were back to from white full brief knickers with paper reinforcement like the top and stuffed with white plastic bags as they were light and gave volume to the bottom. This was accompanied by black tight and white card attached to the tights using the same gaffer tape from the head. (Tip: ensure when attaching card to leg that it is secured tightly enough otherwise will fall down very easily.)

Being a student the best part of this costume was the fact that it cost me less than £10. Was one of my favourite costumes ive ever done. 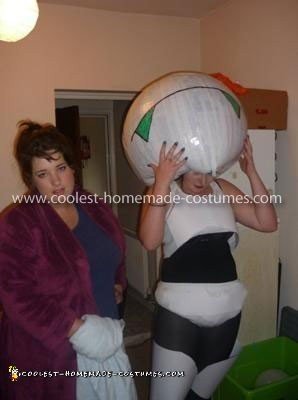