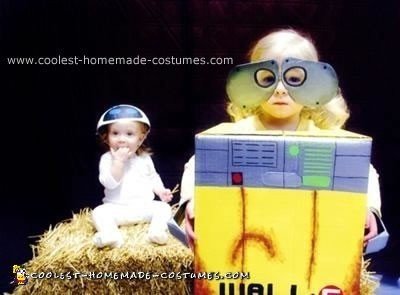 When my oldest was 2 we decided to take her out to the movies for her first theater experience. Wall-E had just come out and it looked like something she’d enjoy. Since then Wall-E has been one of her favorite movies.

These homemade Wall-E and Eve costumes ended up costing me the price of the spray paint and duct tape. All other supplies I had. Many of the ideas I used for these costumes were from bits and pieces of other people who made their own Wall-E costumes.

For the EVE costume I blew up a balloon a bit bigger than the size of my littlest one’s head. I then put ripped up white paper and water/glue mixture, like paper mache, on the top half of the balloon and let it dry. I popped the balloon then painted it white and painted EVE eyes on it. I punched two holes on the side and tied some yarn to tie under her chin. Her outfit is just a white onesie and white tights.

For Wall-E’s costume, his body is a box with the bottom cut out completely and a hole for the head and two on the side for the arms. I spray painted it yellow and painted the other details on the front and sides. For Wall-E’s hands I stitched two pieces of elastic to make two ‘bracelets’. Then I cut his ‘claws’ out of a cereal box and covered them in duct tape and taped them onto the elastic bracelets. This was so my daughter could use her hands.

For Wall-E’s eyes I took the lenses out of some small sunglasses. I cut two ‘Wall-E’ eye shapes out of stiff cardboard and hot glued them to the sunglasses. I painted them silver and black. And for Wall-E’s lunch box I cut a small box, used the top half and rounded it a bit to look like the lid, and painted it white and red. I then attached it to the back of the box. That was her trick-or-treat bag.

(I don’t have a video, though. I hope that doesn’t count me out. And if the images are too small, I can try and make them bigger. I wasn’t sure how small much smaller they needed to be. Thanks) 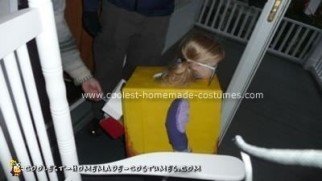 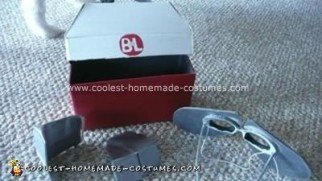 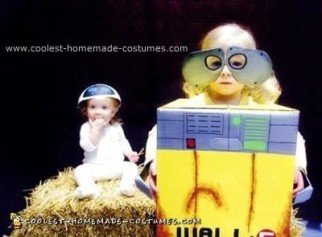