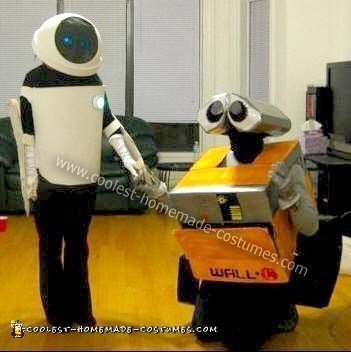 From here on, it became easier. We took a white LED light, cut out green plastic, put an image of a leaf on the inside of the green plastic and then used putty to stick that to the LED light. That was Eve’s light. We put a blue light-up pen on her cardboard arm and that served as the laser.

For Wall-E, I got a large cardboard box and 6 pieces of white poster board. First, I cut the opening for Wall-E’s stomach/garbage collector. Then I spray-painted those pieces of poster board orange-brown. I then duct-taped the top to look like metal. That was easy. Wheels were just strips of cardboard, duct-taped black and shaped into a triangle. They were then tied to the box. A hook was also installed on the back to hold Wall-E’s cooler.

The helmet was tricky. I took a long piece of cardboard and bent it to the shape of Wall-E’s head. I duct-taped the head and made the eyes out of pieces of white paper; I then cut them out, glued them to clear plastic and then duct-taped them to the helmet.

We had so much fun with our costumes and many people complimented us and took pictures. Hand- made costumes are the best because they show creativity and are tons of fun! 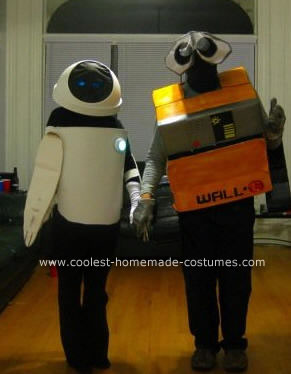 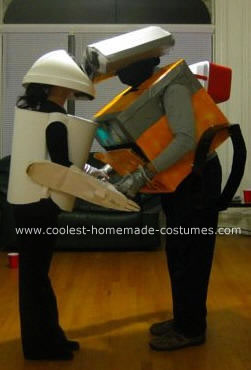