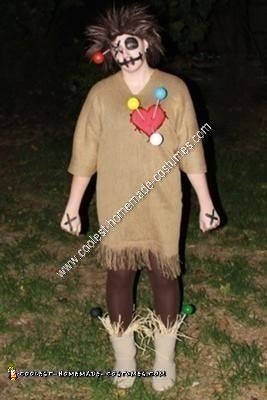 I had so much fun making my own costume and dressing scary last year when I went as a zombie prom queen so I knew I wanted to do something similar this Halloween. I wanted a costume that would be different and fun to make. I searched for homemade costumes and after much decision making, the homemade Voodoo Doll Halloween costume idea really stuck with me. It seemed really creepy, creative, and doable. I also had never seen it done before.

It took a lot of planning, materials, work, and help from my boyfriend/family, but I enjoyed every minute of it. All the time and effort really paid off. I received so many compliments at my Halloween party and actually stumped a few people who couldn’t guess what I was even though I really got into character. We had a costume contest and I won most original costume and best costume! =)

Figuring out what materials to use was the hardest part. However, most of them could be found at a craft store like Michaels or ACMoore. Putting it together was a tad bit easier. My dress was originally a reversible shawl that I turned around and pinned in the back. I found it accidentally at Walmart for $10. It was the perfect material!

The pins are made out of dowels that I spray painted silver and styrofoam balls that I painted different colors with acrylics. The heart is made out of a piece of styrofoam and red felt. The pins were the trickiest part of the entire costume because I had to find a realistic way to stick them into the heart without having them pull on my dress and flop around. The Styrofoam really worked. I’d definitely recommend it!

I criss-crossed pieces of black yarn and hot glued them to the sides of the heart to make stitches. I bought brown opaque leggings and used slippers I already had. I stuffed my slippers with straw/hay and borrowed the funky brown wig from my cousin. I bought the black make-up (for my eyes, mouth and hands) and black lipstick at a local Halloween store.

I think I spent between $30-$40 for everything. Not the cheapest and easiest costume to make, but this homemade Voodoo Doll Halloween costume idea was comfortable, really fun to create and it was a huge hit. Definitely worth it! 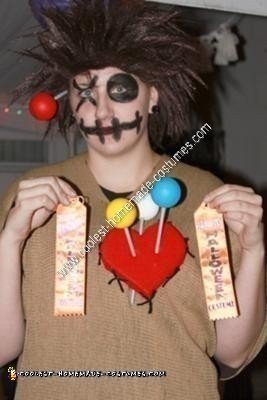