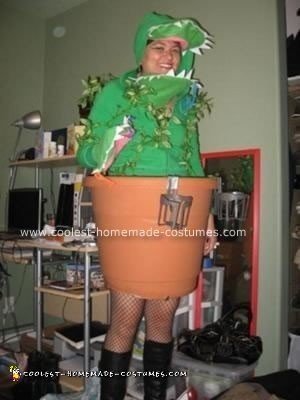 For this Homemade Venus “MAN” Trap Costume , I got a large plastic potting vase from a hardware store and cut a hole in the bottom. I had to use a series of bungee cords in order to get the vase to hang. I’m basically wearing a bungee around my waist and there are smaller cords hooked onto the bottom of the vase that latch on to my bungee belt.

I found an old green sweatshirt and sewed fake vines and leaves on it. The head is made of two visors covered in green fabric. I used colored felt to create the tongue and teeth.

The hands are also fabric which I sewed to create mitts and used white felt to create teeth. I also made man symbols out of pipe cleaner and placed them in the ‘mouths’ of the costume since I was, after all, a ‘man eater’

I added cup holders to the ends of the vase so I could carry my beverages with me and have my hands free.