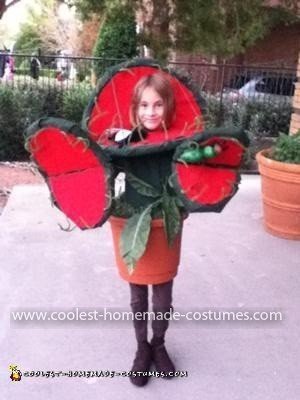 First, I cut the foam into two large half circles for her headpiece. Then, I cut four smaller half circles for her hands. I covered the foam with green felt using spay adhesive. On one side of the foam I put red felt for the inside of each flytrap. Under the edges of the red felt, I attached cut pieces of pipe cleaners for the “teeth” of the flytrap, and bent them into a curve.

I attached the half circles to each other with green yarn so that the flytraps could be opened and closed, and she inserted her hands into small slits I left in the felt. Lastly, I attached a fake fly to one hand and to the headpiece.

I cut a hole in the bottom of the flower pot for her legs. I added foam to the inside with spray adhesive so that it fit more snugly, and added “suspenders” with green yarn so it didn’t fall down. She wore brown leggings, a green turtleneck and green gloves. I covered her shoes with brown socks and glued green Spanish moss onto the socks.

I cut two half circles of cardboard and attached green Spanish moss to them with spray adhesive, then once she was in the pot, I put those around her waist, on the top of the pot to cover the foam. Lastly, we attached silk leaves to the pot.

For a treat bag, we used another, smaller plastic flowerpot with a handle made of green yarn.

She won her school’s costume contest and had three people take pictures of her when we went trick or treating. People LOVED her Venus Flytrap Costume and thought it was so creative. I told them it was all her idea. 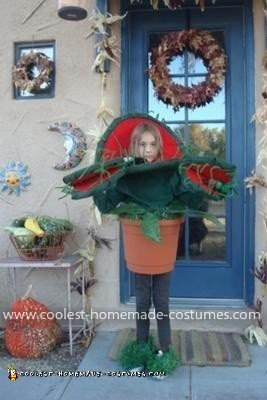 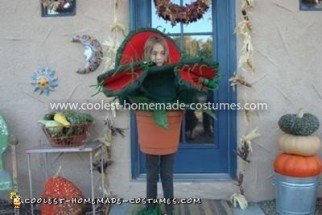