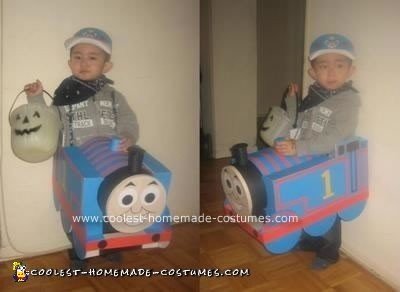 I couldn’t fine a Thomas costume anywhere or even a train costume for my 2yr old boy who loves Thomas so I decided to make a Homemade Thomas The Tank Engine Costume.

I used foam boards since they are very light and Bristol boards and construction paper with lots of glue, super glue and double sided tape. I cut out the sides of Thomas first from the foam boards and made sure it was not too big or small for him and then I cut out blue Bristol board and glued in on the cut out foam boards.

I did the same for the back of Thomas. I cut out strips of red Bristol board for the red lines. I used black construction paper for the windows and then glued that onto yellow construction paper and cut it out making a yellow outline of the black window.

I did the same for the #1 using yellow and red construction paper. I used one of my container lids to trace out Thomas face on the foam boards and covered that with off white construction paper and glued in on. I then traced circle for his eyes and glued it on along with the eyebrows and mouth. I drew his nose and the outline of his mouth with a pencil and then traced it over with a black marker. I cut out a strip of black Bristol board and super glued the edges to the edges of Thomas’ foam board face. I cut a hole on top of Thomas’ head for the funnel, which I also used black Bristol board for.

The top of Thomas is made with Bristol board for the arch and foam boards for the sides of the arch. I did the top left and right panels first with foam board, covered them and then super glued then to the body of Thomas reinforcing it with a hinge-like cardboard under it. I cut out red strips of Bristol board for the stripes on Thomas and glued it onto the arch and then I super glued and double sided taped the Bristol board arch onto the panels underneath. I also made a smaller funnel in the arch with blue Bristol board. I used another lid container to make the wheels out of foam board and covered it with blue Bristol board and then cut the wheels in half and glued and taped those onto the body. It hangs on him with thick laces that are held on by Velcro.

This whole process took me about a couple of hours for 2 night and then some of Halloween as this was my second attempt at this because the first attempt was with cardboard and I thought that it was going to be too heavy for him to walk around in the while trick-or-treating and it was also way too big for my 2yr old. I was also very big on detail and wanted it to look as close to Thomas as I can get. A lot of the things I used was from the dollar store such as the foam boards, construction paper and Bristol boards. I used heavy duty tape, double sided tape, super glue and regular glue. A lot of trial and error but definitely worth it!