My boyfriend and I always like trying to make slightly more interesting couples costumes. This year we decided on a homemade Poison Ivy adult couple Halloween costume idea. The ingredients for creating the seductive super-villainess are as follows:

* Green Leotards (preferably a darker shade of green), $15-20 on Amazon.com
* Fake Leaves – can be bought at any craft store for very cheap. Stapled to the border of the leotards using a mini-stapler.
* Tights (couldn’t find light green tights so used fishnets), $5 at Spencers
* Long Gloves (Bought WHITE gloves and then dyed them green)… use less dye than what the package called (to make them pale green). Gloves purchased at Claire’s (price unknown)
* Green Fabric Dye at a craft store ($3)
* Red Wig, $15 at Party City
* Boots (not seen in picture). Already owned tall boots (about upper calf level) and simply rolled dark green tights over top them. Dark green tights/boot covering were $3 at Party City (IF YOU DON’T HAVE BOOTS: While Poison Ivy is pictured wearing boots she is also portrayed wearing some sexy green or black stilettos. Personally, I found boots more comfortable to walk around in all night).
* Make Up, LOTS of green eye shadow.
* Red lipstick (that I didn’t put on until later – when I realized I wasn’t wearing any)

SUMMARY: Overall this homemade Poison Ivy adult couple Halloween costume idea is a very fun and easy costume to make. I think the total amount of money spent was about $40 dollars (a good deal since online costumes are $50+), but making it yourself allows you to customize it however you like. 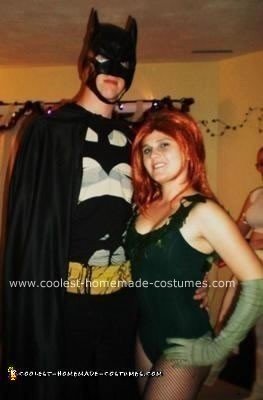