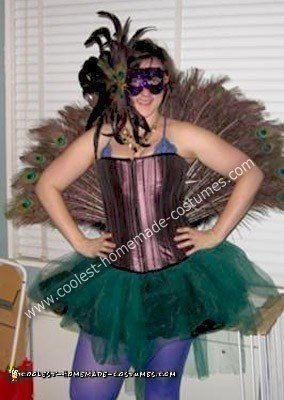 After looking at various peacock costumes around the inter webs, I decided the build my Homemade Peacock Costume on a peacock fan. From there, I added about 60 more peacock feathers, trimmed to various lengths, with hot glue. I used several of the end pieces I cut off to make cross bars for stability.

I got the feathers online, which meant they cost $30/100 feathers rather than $2-5 per feather.

To attach the tail, I used about three yards of tulle, wrapped around twice and tied in the back. For added stability, I tied a ribbon to one of the crossbars, and attached that to the straps of my slip.

Clearly the rest of the costume is significantly less important, but I used a blue slip over blue tights, then added a purple corset and black crinoline. I used several extra yards of green tulle to make a gathered skirt. For accessories, I used a necklace, purse, and boots I already had, and purchased a mask.

The Homemade Peacock Costume went over well, and lasted me through several events. The tail will now hang on a wall in my bedroom. Getting in and out of cabs was difficult, and the tail acted as a sail in the wind, but I’m surprised it wasn’t destroyed by partiers.