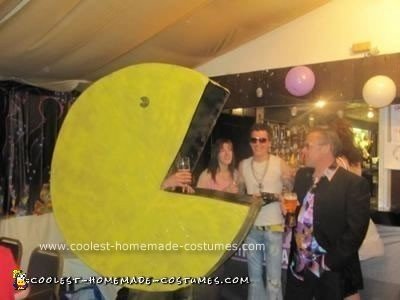 A family friend recently turned the big 30 and with it came a 80’s themed party. With me being me, I couldn’t help but go all out! I decided I wanted a costume that was easy for everyone to recognize and something that was going to be unique.

This Pacman Costume was actually really simple to build. First was to get two large sheets of cardboard (I taped a few smaller ones together). I layed down on one and got someone to mark around me so I could make sure I got the right size. Then I took a pencil and string to mark out the circle. I then cut this out and used it as a template for the second circle. Once I had two large circles I marked out the shape of the mouth and cut that out. I then used cardboard struts to space the two circles apart(the width of my body!) I then used an old crisp box and cut a circle in the top. This was used as the support so the whole costume rested on my shoulders.

The next step was to cover the rim between the circles which I done by rolling cardboard and taping it down. Then all that was left to do was spray paint it!

The costume went down a treat and everyone loved it. I even found that the front of the mouth made a handy pint holder!