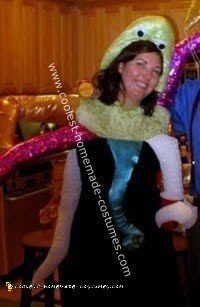 I believe I had a very original Homemade Octopus Costume. I had some shiny pink material left over from the year before and was brainstorming what to do with it. My roommate threw out an octopus and I latched on to that real quick. Rather than being all shiny and pink, I thought it would be cute to have a kind of patchwork octopus.

My roommate helped a lot with the design and execution. We started with copying a “pattern” from one of my hoodie long sleeve shirts. From that I made the shoulder and hood piece and attached sleeves from a different piece of fabric. Then I attached a piece of fabric to the hood in order to stuff it with batting.

The remaining six arms were fairly simple in the beginning. I just sewed tubes and put an angle at the end, then stuffed each with a coat hanger and batting. Attaching the arms to the rest of the piece was a little more difficult. They were quite thick at the ends so the sewing machine would not work, I had to sew them on by hand.

Lastly I added two googley eyes to the head. The funnest part about it was that the coat hangers inside the arms allowed me to have a cup holder for the whole night.