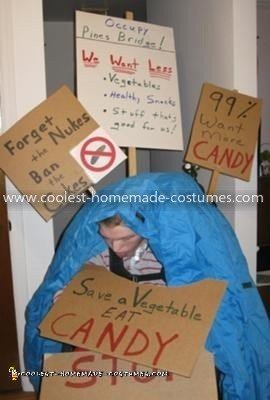 My husband came up with the idea for this year’s costume – a take-off on the “Occupy Wall Street” protests. Christopher’s protest was “Occupy Pines Bridge” – the name of his school.

All of the signs were based on the idea of what kids would want to protest – things like vegetables, healthy snacks and wanting more candy! The signs we made included what Christopher was “occupying” (Pines Bridge), his list of demands (less vegetables, healthy snacks and things that are good for us) and the 99% – all things easily associated with the “Occupy” protests. We also included other more general “protest” style signs.

The signs were made on large pieces of cardboard and either stapled to pieces of (stick) wood or attached to the wheelchair or wheelchair tray.

We draped a blue tarp over Christopher’s head and shoulders for his tent – just as the Occupy Wall Street protesters are using tarps and tents for protection from the elements.

Finally we programmed Christopher’s Step-By-Step Communication Switch with protest chants such as “Hey, hey, ho, ho, healthy snacks have got to go” and “We want candy, we want candy” and “What do we want? CHOCOLATE! When do we want it? NOW!” There were only three of us doing the protest chants (two men and one woman) but we sounded like a large crowd!

It turned out that the Grinch (in the form of the unusual October Nor-eastern snowstorm) stole Halloween this year! Our town Ragamuffin Parade and church Trunk or Treat were canceled during the snowstorm. And Halloween night there was still too much snow and too many downed trees and branches to negotiate trick-or-treating with the wheelchair.

And by the time school finally opened at the end of the week, the administration said Halloween was over and done so no celebration was held at school either. But Christopher did put on the costume so we could at least take pictures to send to everyone who had been waiting all month to see what his Homemade “Occupy Wall Street” Costume would be this year! 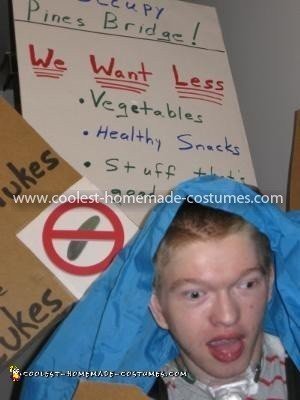 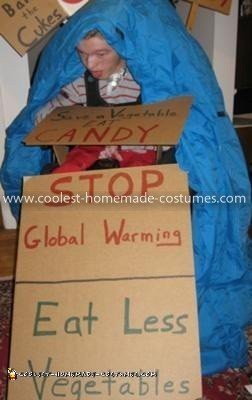