“Get over here!” The first time I heard that then saw the spear get thrown in the game! I was in awe. I was inspired to always make a Scorpion (of Mortal Kombat fame) costume, but of my own design.

This Homemade Mortal Kombat Scorpion Costume was pretty easy and came out nice for fairly cheap. I don’t have pictures of my progress but I have detailed the makings as much as possible, so here’s the break down starting from the top:

A Black Baklava as the hood:
Scorpion?s Mask: A yellow painted and modified Paintball Mask (eBay).
Modifications: I added an elastic band (Wal-Mart) and attached it with 2 rivets on each side to hold it to my head. Foam (Hobby Lobby sticky back) on the inside so it’s comfy against my nose and face and some insect screening material Lowes (hot glued in place) on the inside so as not to see the through the holes in the mask.

The ninja outfit is just a Black GI I found on eBay.

The yellow Tabards (shoulder pieces), Sash (elastic bands were sewn in the back to keep it tight) and lower flag (hangs down below the waste) are a wide Yellow Kimono Belt (eBay) cut into pieces and hand sewn to fit (no sewing machine was used at all in making this costume).

The Skull Belt and Skull Belt Buckle are from Hot Topic, but still modified by me.
Modifications: The Skull Buckle had fangs which I ground down with a bench grinder to be more human like. The belt was modified to fit the buckle half way around.

The forearm and shin armor are soccer armor pieces (Wal-Mart)painted and modified. The forearms armor is youth size and the shin is adult size.
Modifications: I added screw on spikes (eBay), painted the armor yellow and glued insect mesh on the inside of the armor that can be seen through, adds to the effect. For the shin armor I found some small plastic skulls (Party City) and ground the back of them flat and hot glued them to the shin armor. (hot glue gun is now my favorite tool).

The shoes are just those cheap water shoes from Wal-Mart, all black. And the thing I’m most proud of is the Scorpion Spear Prop for pictures, as seen in the photo:
Modifications: I took a Plastic Kunai Dart (eBay), cut the loop end off and drilled a hole down the middle. I next found some bendable wire at Lowe’s. To make the wire black I used some sheathing from an old vacuum cleaner electrical cord. I cut it to a good long length, pulled the wires from the inside of the sheathing (pain in the butt to do) and ran the bendable wire through it. I then bent the wire so it looks like it would be in motion forward and also bent the end to fit in my hand and be held in place by my other hand. This gave it the effect of coming out of my hand. I then glued the bendable wire inside the plastic Kunai dart and then wrapped the dart, now the spear tip, in some black string I had in my garage.

I plan to make some more alterations to it like V-cut the flag, instead of flat on the bottom and add more cushion to the inside of the mask. I unveiled it at Imagicon in Birmingham, Alabama, USA in March of 2009 and people loved it. I was asked all kinds of questions. I’m so very proud of it.

My next planned costume is SubZero with his Kori Blade, as never seen before. The only hint I can tell you is the blade will look like real ice. I have a wonderful idea which I will share when it is complete.

I hope this was enjoyable and inspiring. “Finish Him!” 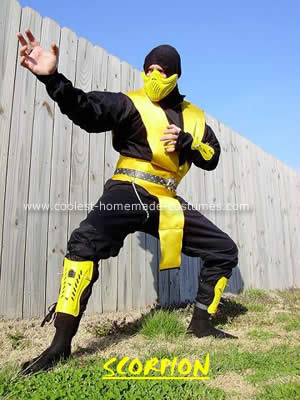