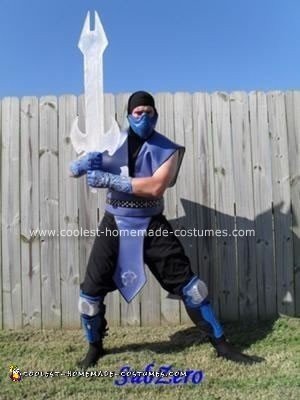 Since I completed the submitted Scorpion (the one with the spear) costume some time ago I wanted to make another homemade Mortal Kombat costume from my favorite game MK, SubZero. Of course it’s not a specific game costume; I just took the idea of SubZero and created my own version. Not only did I make the Iced Arm version I also made his Kori Blade (Ice Sword) and an Ice Ball.

Again in my mad scientist like fury I didn’t take pictures of the process but have a good break down.

The Blue Ninja Mask: A modified Paintball Mask shell (eBay). Modifications: I added elastic band to keep it tight to my head, secured it in place with rivets. I painted it blue. I added some silver aluminum mesh material (Hobby Lobby) on the inside to accent the see through areas. I added “sticky back” foam to the interior for comfort. I also added two rivets to the sides of the mask as like cold lung air pressure vents.

Main Costume: The Sash and Tabards are just fake blue leather type material I picked up from a local fabric store. I cut out 6-inch wide strips about 4 feet long. I then pinned it together to look like I wanted and cut off any excess material. It is accented by black hem tape (Wal-Mart) all sewn together. I sewed on Velcro in the back to keep it on and secure the costume in place.

I found a neat little “Iron On” silver design that looked cool (Hobby Lobby) and added to the flag between the legs. Warning – a very hot iron will melt the fake leather fabric — I learned from experience. The belt is just a neat belt with square spikes slightly raised (Hot Topic) and riveted to the costume to not shift around when I wear it.

Blue Arms: These are just blue wrestling gloves used by glamour wrestlers (eBay). I tried my best to make it look frozen so I just used a hot glue gun and melted hot glue all around it, then lightly wiped it with white paint. I have since changed this to a better looking idea, but I have no pictures as of yet. I used the blue latex costume arms sold (eBay) for the blue character in the movie “Watchmen.”

Knee Armor: Nothing special here. I found some knee armor with clear soft rubber armor that looks like its frozen. I found it at Wal-Mart. Nothing modified.

Shin Armor: It is modified cheap shin armor for soccer at Wal-Mart, adult size. I cut out the molded “Wilson” logo and hot glued a background silver aluminum mesh material I got at “Hobby Lobby.” It is painted blue and I added elastic bands to keep it secured to my leg.

Feet: I went out and purchased the actual TABI Boots for a ninja costume.

The black costume underneath is what I use for my Scorpion costume as well. Black Pants, a black T-Shirt and a black balaclava.

The Kori Blade: It took some time of pondering but one day at Lowe’s, it came to me. This took an entire weekend to make but here goes my secret to making it look like an Ice Sword. I purchased the thickest sheet of Lexan plastic from Lowe’s. I made a prototype Kori Blade out of cardboard using some templates I made. I made the cardboard prototype first to ensure the templates would create the right size. There are only two templates; the main blade and the center accent area.

I used my angle grinder with a sander paper flap wheel to grind the main blade to look as one blade only. I then made sure the accent pieces were exactly the same size and shape by taping them together and grinding them as the same shape and size. I glued them to the main blade (one piece to each side) and clamped them in place. I then cut a piece of PVC piping to the size I wanted for the handle and painted it blue.

Keep in mind the plastic blade needs to have a tang to fit inside the PVC piping, then be secured in place. I made the tang the exact width as the inside diameter as the PVC piping. For the Pommel (handle end piece) I found a clear plastic faucet handle (Lowe’s) with no letters or wording and just glued it to the end. To secure the blade inside the PVC piping I used a lot of contact and hot glue.

To make the blade look more like a sword of ice I used my angle grinder to make the sword edge irregular, like it was used in battle. I also used a frosted paint for clear glass or plastic (Lowe’s) to give it that frosted look. I began by heavily spraying the edge and got lighter as I went closer to the center (colder in the middle). I also sprayed the entire pommel frosted. The cutting, grinding and gluing made it take a whole weekend.

The Ice Ball: Very simply I took a foam ball from “Hobby Lobby” and wrapped it in plastic food wrap until it looked like an Ice ball. Then I found a round clear storage shell for those over-sized Christmas balls (eBay).

I put the plastic wrapped ball in the clear plastic shell, hot glued it together, shaved off the edging, and splattered hot glue all around the ball as if the ball is being formed from the air. This gave the ice ball a 3 dimensional look. To make it look like it is hovering in between my hands I hot glued some fishing string in a loop on two ends. I just wrapped the loop around two of my fingers on each hand and pull it taught.

For an extra added effect I bought some dark blue contact lenses for my eyes from eBay. Real cheap ($20) 30 day only wear lenses.

That’s pretty much it. I spent about $150 for getting everything to make this homemade Mortal Kombat costume (the sheet of plastic was like $40 by itself). All in all I’m proud of it plus it already gave me ideas to make a Version3 of my Scorpion costume. Hopefully I can get that one submitted too. I hope I have inspired someone to create something from their imagination.