I was planning on celebrating Halloween with a girl that planned on dressing as Mileena from Mortal Kombat, but was frustrated by the lack of any good pre-made Scorpion Costumes.

I decided to take matters into my own hands and create my own Homemade Scorpion Costume. I actually found this website to see what other people had done to see that it was possible.

The main front and back piece were cut from a vinyl/blackboard material that I stapled yellow cotton on top of and covered the border with electrical tape to cover the staples. I used a ruler and permanent black marker to create the crisscrossing lines.

The skull at the very bottom of the front came from cutting apart a toy ninja throwing star. The black stud pyramids that you see on top of the yellow were carved out of Styrofoam that is used for fake plants that I then spray painted black with a misting of yellow to get a nice look. I then hot glued them to the front and 3 (that you can’t see here) to the back. I wore a puffy vest underneath it to make it all puff out a bit.

The shoulder pads were made with cardboard overlaid with the black vinyl material attached with staples and electrical tape. I hot-glued similar cut up ninja stars as above and also the painted Styrofoam pyramid pieced. I attached them to the main piece using staples.

The shin guards were old field hockey shin guards that my sister had a long time ago that I spray painted black and then placed the same vinyl/yellow cotton material on top and fastened with staples and electrical tape.

The gloves/forearm guards were made similarly as above, but using black studded gloves that I had as the base.

The belt was a studded belt that I had, which I added a skull bought from a dollar store. I cut off the front of the skull, poked holes in it in four places, and secured it to the belt using pieces of shoelace which were hidden in the back of the belt.

For the mask I used a black mask that covers up the entire head except for the eye region. I bought a white plastic mask, cut off the top part, spray painted it yellow, and added details with a black permanent magic marker. I hot-glued extra elastic to the bottom part to make the mask fit more snugly to the face.

To make Scorpion’s spear I used a Styrofoam dagger to which I cut off part of the cross guard to make it a spear. I then tied twine to the end. I added a sword to the back to make it look better and secured it with a normal black belt. I cut slits in the sheathe to snake the belt through.

The boots were normal black work boots that actually made me a little taller and more menacing.

The “knee pads” were made using the same type of cut up ninja stars as above dangling by black cotton material that was tied above the knee.

In the end it took a bunch of hours and stops at different stores to make the Scorpion Costume. I had some rough ideas of how to complete it, but sort of went along gathering new ideas as I visited different places to see what pieces might work.

I wore the costume on 2 different nights at different clubs and received a lot of positive remarks. I guess it’s good that there wasn’t a pre-made Scorpion costume available since I was the only person wearing one wherever I went.

Good luck to anyone in making their own! 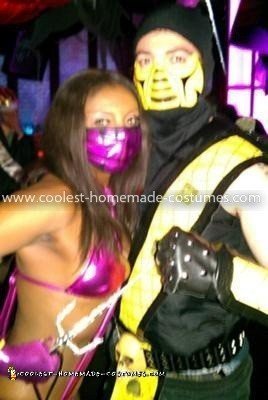