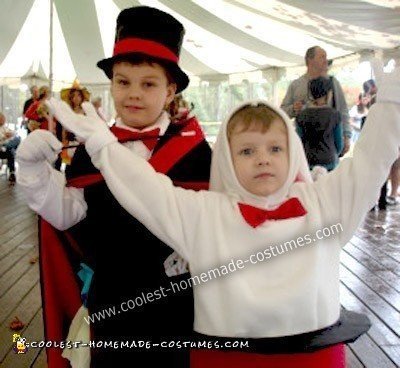 My son’s like to dress as a theme for Halloween. This year they went in a Homemade Magician and Rabbit in Hat Costume.

I purchased the vest, pants and white shirt at thrift stores. I had to alter them slightly as they were too big. I found a large bag of fabric at Goodwill and was able to make the magician’s cape, bow ties and the trim pieces from this fabric.

For the cape, I sewed two rectangles of fabric together – one red and one black – and added strips of fabric for ties. The top hat was made using black posterboard and satin fabric (bought on clearance for $1/yd). I first cut a rectangle of posterboard and hot-glued it together into a cylinder. I attached a circle for the top using hot glue. I glued on a brim made from posterboard. I used spray adhesive and hot glue to attach the satin fabric. I trimmed the hat using leftover red fabric.

The bow ties are rectangular pieces of fabric cinched together in the middle. I added squares of fabric tacked together to make the scarves coming out of one vest pocket. I hot-glued playing cards into the other pocket. I painted a plastic stick for the magic wand and added a pair of white gloves.

I hot-glued on the bow tie for a little color. The top hat is made in the same way as the magician’s except it is bigger and without a top. I hot-glued the rabbit ‘shirt’ inside the hat. The entire thing went on and off like a shirt. I added white gloves and a fiber fill tail. I estimate that the cost for the costumes was under $20 combined. 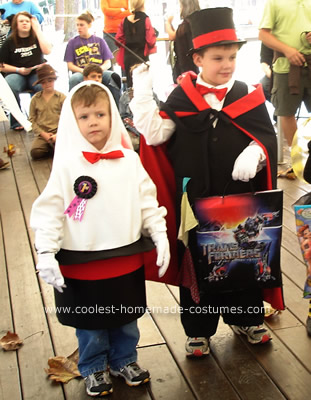 1 thought on “Coolest Homemade Magician and Rabbit in Hat Costume”