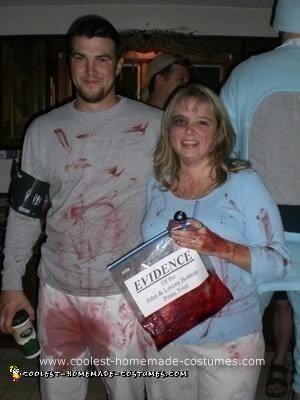 For a friend’s Halloween Party my husband and I went as John and Lorena Bobbitt. This costume was a big hit, comfortable to wear, and won many categories for the costume contest! We won best couple, most original, funniest and scariest (because many men at the party were afraid of me and my big knife).

For our homemade John and Lorena Bobbitt couple costume we used clothing we already had at home. I wore a pair of comfortable pajama pants and a shirt. My husband wore a pair of white paints he had from being a doctor for Halloween years before and a regular shirt. We were trying to wear light colored clothes so the fake blood showed up well.

Next came the fake blood. We purchased fake blood at a local retail store and splattered it all over our clothes and some on our skin. I gave myself a black eye using eye liner smudged on and put some fake blood on my face too. We figured the more blood the better the effect would be. We put extra blood ‘down town’ on my husbands white pants so everyone would know who we were.

I carried a large fake plastic knife on a rope around my neck so I could keep it with me during the party and not lose it. I also carried around a clear plastic bag with a large piece of kielbasa sausage and fake blood. The bag was labeled; EVIDENCE of the John & Lorena Bobbitt penis trial.

This homemade John and Lorena Bobbitt couple costume was great!! It was comfortable to wear, easy to make, and a big success and winner at the party we went to. Some people’s reaction at first was “ewwwww” because of the blood but once they realized who we were they laughed and loved it!! I would recommend this to anyone!!