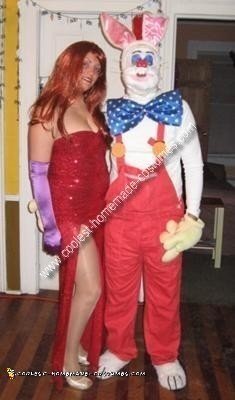 Growing up I always LOVED the movie ‘Who Framed Rodger Rabbit?!’ SO for Halloween I talked my boyfriend into being Roger Rabbit and I dressed up as Jessica. This is how I made the homemade Jessica Rabbit and Roger Rabbit couple costume:

I bought white mens overalls and dyed them red in the washing machine. I bought a white turtleneck at the Salvation Army Thrift Store and I found the over sized bow in one of the seasonal Halloween costume stores.

As for the shoes and the mask, these were the most tasking to make. In fact this was the second try for the mask. I used a set of bunny ears as the base for the mask and then made a hood out of white fur. Then since the fur was too difficult to wear over the face I used white felt and magic markers to color in the eyes. I cut a hole where the nose and mouth would go and hot glued the rubber bunny nose and teeth to felt.

I used a foam ball for the cheeks, by cutting it in half and then hot glued it in the inside of the mask. I then glued more felt over the inside so that it was not too uncomfortable to wear.

The shoes were simply those old man slip on white shoes that you can buy at Wal-Mart. Then I used the same white fur as the mask for the shoes. The fur was wrapped around and hot glued to the shoes. I used black string to make it look like there were toes. We also bought the cartoon gloves at the costume store. I tried to dye them yellow but it did not really work (I would not recommend trying to do this).

For the Jessica Rabbit costume, I bought the red wig at a costume store and white formal gloves at Claire’s and then dyed them in the wash machine (the dye was bought at Wal-Mart). I bought red sequined fabric at Jo-Anne Fabrics. Since I am not much of a sewer I used an old short black dress that had a rip in it. I simply hand-sewed the red sequined fabric to the top of the dress and let the fabric cover the short length of the dress. I put on bright red lipstick and caked on the purple eye shadow. I already owned gold sequined shoes so I wore those instead of buying purple shoes like Jessica actually wears.