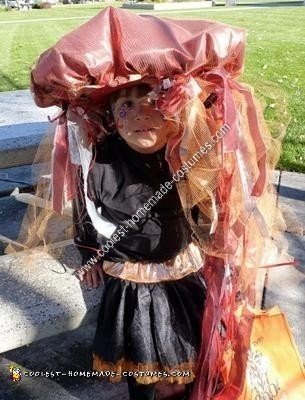 My three-year-old daughter Waverly (Wavy for short) loves the ocean and all its critters. After a visit to the Monterrey Bay Aquarium in California this summer, she decided that she wanted to be a jellyfish for Halloween, in particular, the beautiful orange “chrysaora achlyos,” or black sea nettle jellyfish.

This homemade jellyfish Halloween costume was a hit; she loved it and was comfortable wearing it, and she received a ton of compliments, plus it was inexpensive and only took me a couple hours one evening from start to finish.

1) I started with a five-dollar kid’s cowboy hat from the department store toy aisle.

2) I cut several circles of quilt batting that were slightly larger than the brim of the hat. I stacked the circles on top of each other and enclosed them in about a yard of metallic orange lamé, tacking the fabric down on the bottom of the stack with fabric glue, basically making a flat, round pillow.

3) I then placed the “pillow” on top of the hat, attaching it to the hat with velcro strips. If you are handy with a glue gun, that would probably work, as well.

4) For the tentacles, I cut long, inch-wide strips of the orange lamé, as well as orange tulle, silver lamé, and some red curling ribbon. I gathered up a handful of the strips, secured them together at one end with a rubber band and attached them to the brim of the hat with a safety pin. I did this seven times in all, resulting in a total of seven handfuls of material safety-pinned to the hat, leaving a space in front for my daughter to see out of. When all those tentacles flowed out behind her when she walked around, she really did look like a jellyfish!

5) I finished off the look with a bit of sea-related facepaint (starfish, waves, bubbles) and a skirt trimmed with some of the lamé and tulle.

So basically, the homemade jellyfish Halloween costume is a big hat with a smattering of accessories! This particular costume is great for little kids because it leaves their hands free for trick-or-treating, etc. whereas a jellyfish costume that involves holding an umbrella is slightly cumbersome, especially for wee ones. 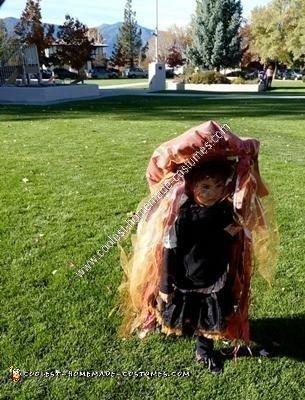 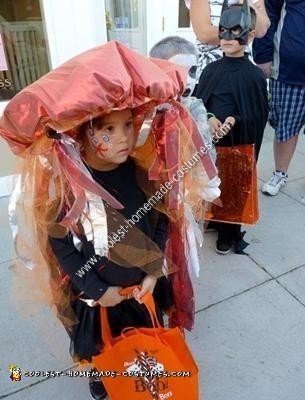 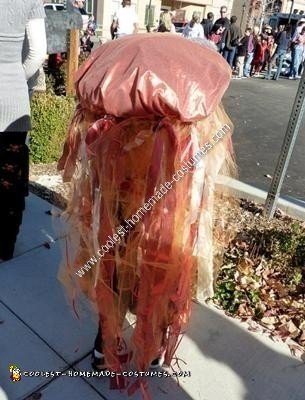