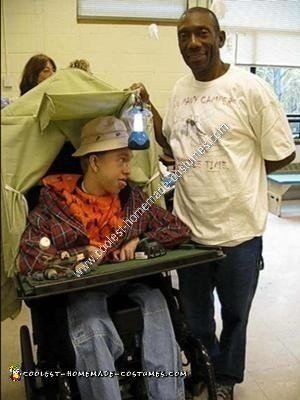 We really enjoy camping even though we don’t get the chance to do much, so we wanted a Happy Camper. One of the best parts of camping is toasting marshmallows in the campfire so we had to include that somehow! We also like sound effects so we found a recording of night crickets to use on Christopher’s Step-by-Step communication switch. We opted to make a cabin-style tent rather than a domed or teepee style tent.

We started by cutting a scrap piece of plywood to fit on the wheelchair tray. Then we built a frame for the tent using 1×1’s on the outside edges of the plywood. We made it high enough to go over Christopher’s head. Crossbars at the top of the 1×1’s provided stability. Coming out from the front crossbar were two dowels that divided the front of the tent into approximately three even sections. The dowels provide the support frame for the tent awning and help to define the tent doorway. We gave the frame and plywood a quick coat of brownish-green paint. On top of the crossbars we added a folded piece of cardboard to make the peaked roof of the tent. Then we covered the frame with green sheets we got on sale. ($6.49 for XL Twin Set!) The front tent flaps were rolled back and tied with pieces of twill trach ties.

For the campfire, we took a small piece of cardboard and painted it the same color as the plywood. Then we used sticky-backed Velcro to anchor it in one corner of the plywood tray. The stones around the campfire were made by crumpling up small pieces of newspaper and using masking tape to hold some edges together. Then they were painted gray and glued in a circle around the inside edge of the cardboard. A small hole cut out in the center of the cardboard provides access to the on/off switch of the flickering yellow pumpkin light we used for the fire. We then some small tree branches, cut them into “logs” and glued them together, along with red and yellow pieces of cellophane to create our campfire.

We hung a small camping lantern from one of the awning dowels. Christopher was dressed in jeans, T-shirt and oversized flannel shirt (and hooded sweatshirt when it was cool) and wore a floppy “camping” hat or his hood. The individual accompanying Christopher wore a T-shirt with a large mosquito on it and “bloody” words saying “So many campers, so little time”!

The lantern, campfire and cricket sounds really made this costume special. 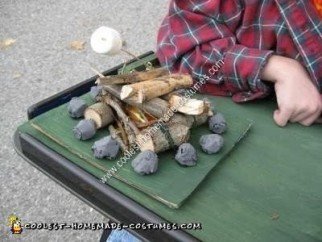 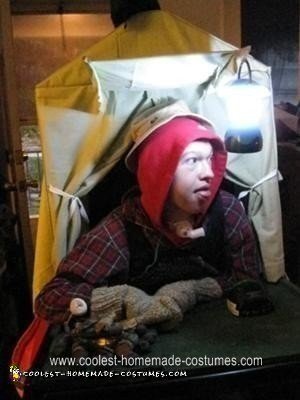 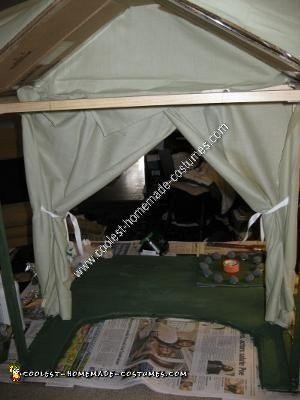