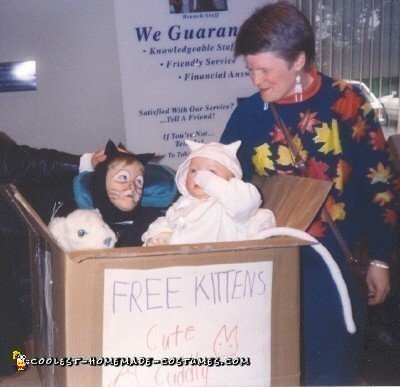 Years ago we read a suggestion in Exceptional Parent magazine to incorporate the wheelchair into the Halloween costume. We’ve had lots of fun doing just that!

We did this Box of Free Kittens Wheelchair Costume when Sarah was six and Christopher was just a year old. It won a prize for “Most Creative Costume” at our local grocery store.

The five and seven year-old children of one of Sarah’s nurses made signs for the three sides of the box saying things like “Free Kittens – the ‘Purrfect’ Pet” or “Free Kittens – Cute, Cuddly, Housebroken”, etc. and drawing pictures on the signs as well.

Sarah was dressed as a black cat (black turtleneck and pants). The hood with ears, stuffed pin-on tail and the “paw” covers for hands and feet were made years ago by Grandma when Mom and uncles were young. Christopher was a white cat (white sweatshirt romper) with hood with ears and stuffed tail made by Mom and white socks on his hands and feet. Makeup whiskers on the face completed the look. (Sarah liked the makeup but Christopher did not!)

We anchored a suction cup bath seat onto the wheelchair tray to support and contain Christopher and then placed some stuffed animal cats on the tray around both kids.

They were a huge hit at our local Ragamuffin Parade. Lots of people came over thinking we had real kittens to give away! They were disappointed when they peered in the box and the only “real” kittens were Sarah and Christopher! (Although one person did help himself to one of the stuffed cats!) 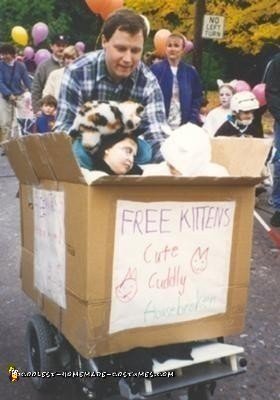 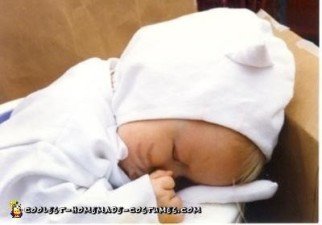 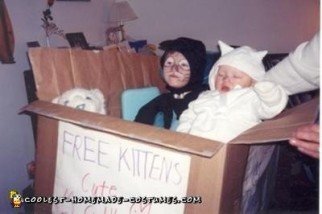