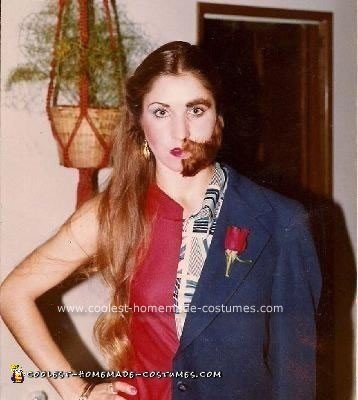 I cut an old men’s suit in half, that I got from the thrift store and sewed it to a Red Dress, that I cut out from material. I pulled my hair to the side and used hair combs to hold in place from the back. Got Theatrical hair from the local theater/costume shop and glued on one bushy eyebrow and half a beard.

I had high heels on one foot and some disco size heel/mens half boot on the other. This Homemade Half Man Half Woman Costume was fun to make!

3 thoughts on “Coolest Homemade Half Man Half Woman Costume”