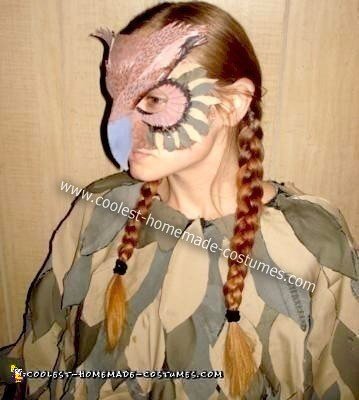 We love Halloween and don’t believe in buying costumes, so this year we put our imaginations to work. I have a two year old, so going super scary was out of the question. This Great Horned Owl costume was handmade in one, very long night.

The mask was made with recycled cereal boxes, paper mache, hot glue, paint and some material matching the wings to give it a 3D effect. We shaped the mask to my face so it fitted perfectly, putting the paper mache directly on my face. It was like getting a facial and easy to remove. I used a blow dryer to speed up the process.

We took pieces of cereal boxes and cut the shapes of the ears and brow, making sure to layer them. Then we painted it with non-toxic paint and markers, then cut the feather shapes and glued them on around the cheeks. I cut and tied some old hair ties together, gluing them under the feathers on each side to hold it on my head.

For the body, we just took an old sheet my husband used last year and cut it into a circle, with a hole for the head. Then came the cutting and gluing. I had an old pair of dress pants from when I was pregnant, and my step dad had a few free khaki gift shirts they give when you buy from Southern States, and some old camo cargos he couldn’t fit into.

I made a stencil and started cutting. Then we glued them on making sure to stagger the colors and layer. I wore a long-sleeved shirt of similar color underneath beige corduroy pants and grey gloves. It was a very cool costume!