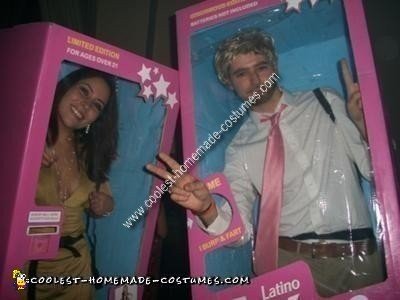 My girlfriend and I were looking to create a homemade costume for the very first time. Some of the requirements we had in selecting the costume was that it had to be funny, original, and something that was easily recognized by the general public. To make a long story short, we thought Barbie and Ken was a great fit for us. We got some inspiration from some other Barbie & Ken costumes on this website but we decided to turn it up a notch in terms of craftsmanship and giving it our own style.

Here are the materials we used to build our Gold Digger Barbie and Latino Ken Couple Costume:

– Cut the wardrobe box according to your height
– Spray paint the outside with pink spray paint
– Allow a few hours to dry and then spray with semi-gloss
– While box is drying, take measurements of the box and begin your design in Adobe Illustrator
– Create the design and take notes of the measurements of the cut outs you need to make
– Trace out the measurements in the box an use a razor or exacto knife to make the cuts
– Stick a shoe box on the back of the box. This will allow you to walk easier and it will also place your body in the middle of the box as oppose to being hidden in the back.
– Make four narrow holes on the back near the shoebox. These holes will be used to allow the straps to be tied around you with the box
– Paint the inside with baby blue spray paint
– Print out all the assets you need on your printer and cut them out accordingly. Use spray adhesive to stick them to your box.
– Cut a section of the shower curtain so it fits the cut out of your box. Use the glue gun to attach i.
– Slide the straps through the box and you should now have a portable Barbie & Ken costume 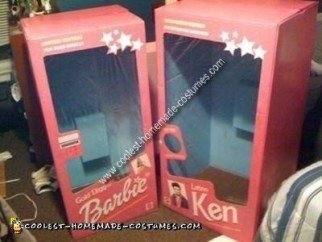 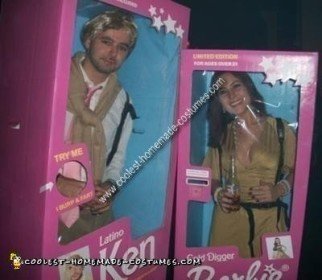 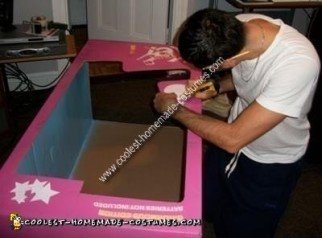