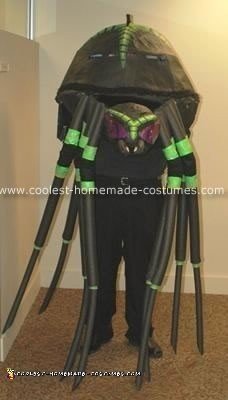 I am very afraid of black widow spiders, so I decided to face my fears head on and make a huge Giant Spider Costume. The challenge of this costume was the sheer size of the thing, as well as my shivering hands.

I first started out with a scary drawing of a spider that looked menacing and semi-intelligent – this took many sketches and some bad dreams. I then started fashioning the body. I did not have a huge beach ball to paper mache, so I made a “thorax” frame out of coat hanger wire and dowels, aka torture.

I then used all kinds of tape to attach poster paper to this skeleton. After that, I paper applied 3 layers of paper mache to the entire piece to give it rigidity and shape. It came out a bit like a bell.

My next move was to make a head that would attach to the body. The head had to be aggressive looking, like it could bite at any moment. I had no idea how it was going to attach it to the thorax, by the way, so I just worried about that later. I proceeded to fashion the head out of avian wire and paper mache, my old friends. I used some pieces of Styrofoam, cut in sharp shapes, to make the menacing mandibles.

I also used some store bought devil horns for poison delivering fangs. Hot glue was used as the adhesive here, however if I had to do it again, I would use something super strong like Gorilla glue. Finally, I painted the eyes a blended shade of grey and covered them with purple cellophane. Once this was dried I painted it black and green. I was originally going for red but went to this neon green for more of a poison effect.

I painted the body black and green as well to match the head. I think the green really helps the body “pop”. I added a ridge along the spine for an alien and evil effect. I then cut eye slits for visibility and tested the thing to see how it would work walking around downtown at night. I felt like I was driving an old World War I tank.

After some days of brainstorming, I figured out how to do the legs while walking through the hardware store. I saw these beautiful long tubes of pipe insulation in various sizes, all of them for a decent price. I must have bought 16 total. Armed with a hot glue gun, I fashioned legs that tapered down in thickness. I secured four legs each to two dowels to make “leg set” for each side. The dowels then attached at one end to the body (via a hole and a crude grommet) and at the other end to the head (again using a crude grommet, I think a hose washer). This held the whole thing together and also allowed the legs to be movable up and down.

Once it was all assembled, it was quite large and not very easy to get through doors. The good thing was that it could be taken apart using the dowel system! I wore this with a black outfit and manipulated the leg dowels with my hands to scare my coworkers, many of which are arachnophobes.

All in all, it was a big hit, well it was also just “big” period.

Recycled Chameleon Costume for under $15