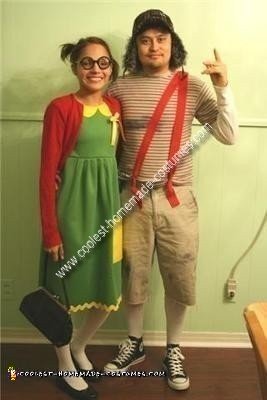 The green material for the dress I purchased at a thrift store for $2. My mom helped me sew the dress with pleats and all. I bought the yellow trim, felt and ribbon at a fabric store and glued it on. The red sweater I also bought at a thrift store for about $3. Chilindrina wears the sweater twisted and almost inside out so I tried to imitate her. The white socks I bought at Target for $3. I already had the purse and black shoes. As for the glasses, also Target $4. The hair was just 2 ponytails uneven on the head and some hairspray!

As for Chavo, we bought some cargo pants and the striped shirt from the thrift store for about $8 total. The red cord we bought at a fabric store for $4 and tied to the loop of the cargo pants.We already had the white thermal shirt, the socks and the Converse shoes. The hat, we bought at Target for $14 (but my husband still uses it, even after the costume!)

We had 2 parties to go to that year and EVERYONE knew immediately who we were! My family was really impressed with ourEl Chavo del Ocho couple costume and glad that we picked such beloved characters as costumes that year. People kept coming up to us when we were apart and asking, “Where’s Chavo?” or “Where’s Chilindrina? Did you leave her?” It was hilarious! People still ask us about the El Chavo del Ocho couple costume ! 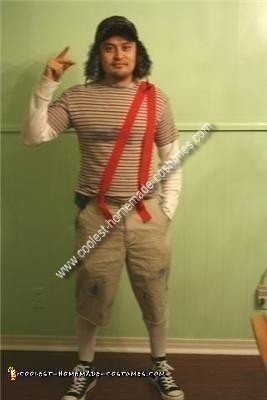 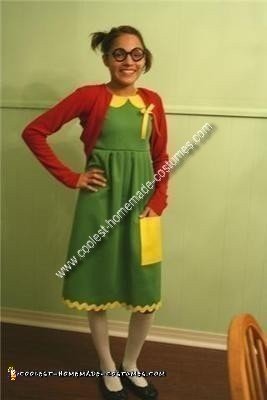 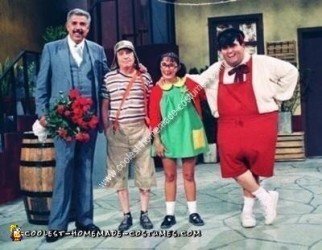