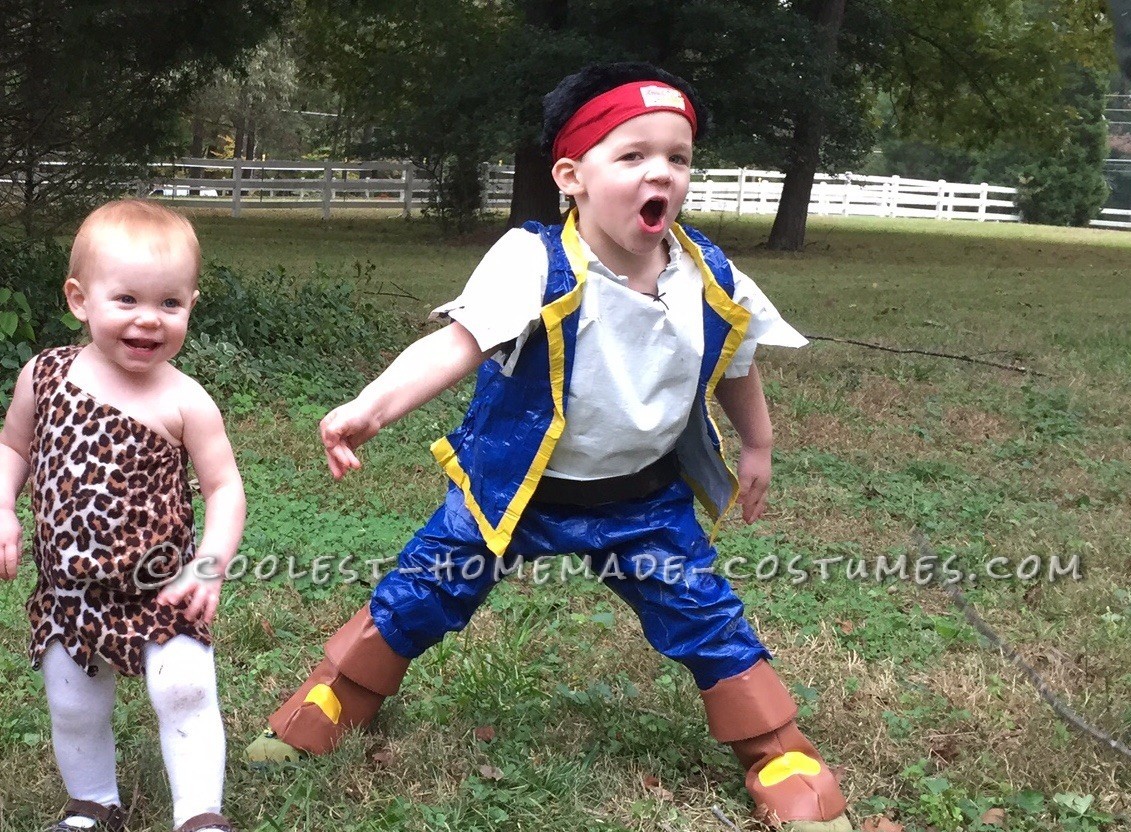 My three year old loves Jake the Neverland Pirate so when I asked him what he wanted to dress up as for Halloween I was not surprised when he yelled ‘JAKE!’ He already had a store bought Jake costume which, for $20, was quite pitiful and my son had already stained it and wore it out. It was fine with me because I really wanted to make him a costume. So I decided to use duct tape and went and bought all the colors I needed.

I found a pair of worn pajama pants, a dingy t-shirt and a stained sleeveless shirt of my sons as a base for his costume. The pants were pretty easy. I filled them with clothes to stretch them out as far as I could and then covered them in blue duct tape. Easy peasy! I cut some slits in the bottom of the pants and they were done.

The shirt I also stuffed and covered it in white duct tape. I added a strip of black around the bottom, cut some slits in the sleeves and cut a slit out in the front and added some string to make it look like Jake’s shirt. Then I stuffed the sleeveless shirt and covered it with blue duct tape. Once it was covered I cut it down the center and added the yellow outline. I made the points to the vest and it was done! It was all really quite simple. Yay! Simple is good! The costume looked great! It all fit and since the duct tape was glossy it looked cartoon-ish. Yay!

Then I wanted to make him some Jake hair so I headed off to Michaels knowing exactly what I wanted. I get there and they have every color but black. :( So I wandered around the store looking for anything that might work. I ended up finding a Halloween bag that was black and furry. Not sure if I could make it work, I bought it hoping I could. I cut the bag apart and attached it to duct tape and formed it into a bandana. The only problem was it wouldn’t stay in my son’s head, the duct tape just slid right off. So I kind of cheated and used the head piece from the store bought costume and attached the cut up black bag to it. It worked great!

My son was thrilled and loved wearing it. I did not make him Jake boots so he wore the ones from his store bought costume for a few minutes before taking them off. He had kids thinking he was the real Jake which he thought was pretty cool. He definitely turned heads. He was hard to get great pictures of because he doesn’t stay still very long but we did get some. :) I just loved his excitement. 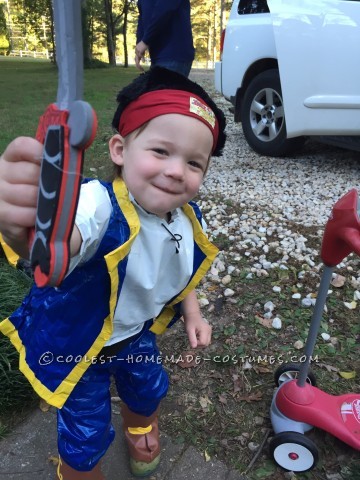 Jake and The Neverland Pirates Costume with Izzy and Cubby