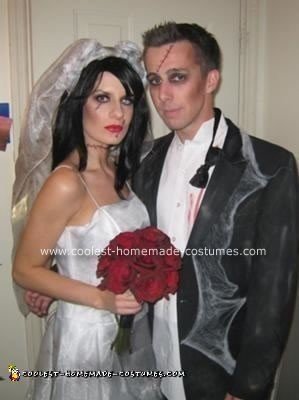 This is our Homemade Dead Bride and Groom Costume of 2008. This took a lot of searching on eBay! I wanted the perfect white puffy wedding dress under 50 bucks. I found a lot of old wedding dresses online but decided to go with a new white prom dress. I bought a can of aerosol black fabric paint, hung it up out side and went to spraying. Hard and dark in some spots but mostly just to make it look dirty.

Then I took the scissors to it and ripped it on certain parts. I also got some red fabric paint and smeared it on/down parts of the dress as well as the fake blood from the Halloween store, there is no right and wrong place to put the red or black paint, just do whatever. Then for an added bonus I also glued small spiders and snakes on it.

The dress also came with a shawl that I sewed together and pinned it around a white head band. The tux was actually my fathers that he used to wear when he was young, but now no longer fits him, so I kinda lucked out there. I smeared white powder makeup for the back suit. For the white shirt underneath I used brown and black eye shadow (old makeup I had). Also ripped the shirt/suit in places. Make sure not to rip it to the point that you see a lot of skin.

For the spider web I used spots of glue to hold the web in place. You have to be very careful with wearing that because one wrong move and it is falling off your jacket. For the face makeup I used black eye shadow for both him and I. I made his look like 2 black eyes, and also hallowed out his cheeks with a reddish brown eye shadow. I bought the blood at a Halloween store and for the scrapes on my face I used a red lip liner.

I am also blond so the black wig was a shocker, I’ve seen pink or grey wigs used well. It was a hit at our friends party, hope it will be for you as well! 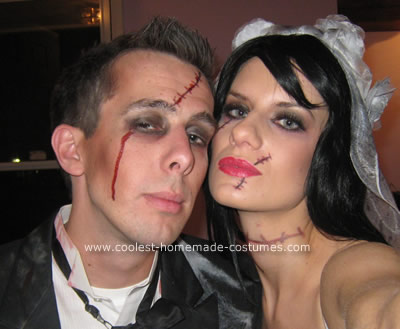 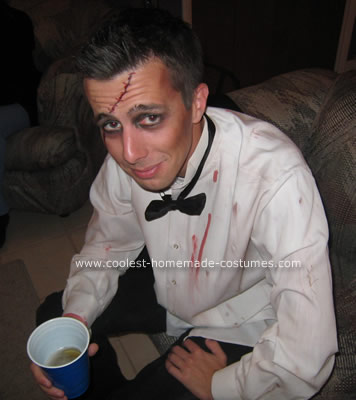