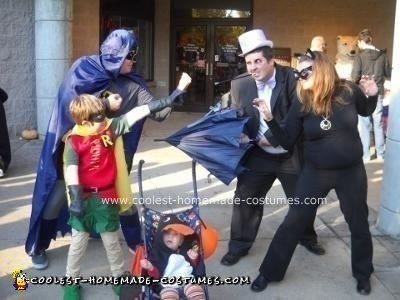 Every year my son (who is now seven) has requested costumes for our entire family and I have made them. This year he wanted to be Robin the boy wonder. He assigned his father the role of Batman, his uncle the role of The Penguin, his baby brother was cast as the penguin’s animal sidekick – a penguin, and I was to be Catwoman.

I could’ve just bought the costumes, but what’s the fun in that? Instead I decided to go 1960’s style and make our own Homemade Batman, Robin, Catwoman and Penguin Halloween Costumes.

Robin’s tunic is red felt adorned with a black and yellow hand cut logo and gold accents. His cape was made with yellow polyester. The britches are modified gym shorts. Tights are beige leggings and shoes are crocs covered in green fabric.

The baby penguin is a child sized hoodie, modified into a onesie using snaps. Accents are made of felt and hot glued “googly eyes”. The legs are baby leg warmers. The shoes are swim shoes made into webbed feet via felt.

Batman’s cowl is made from a simple black plastic Halloween mask painted and affixed to blue fabric. The ears are fabric covered cardboard. The cape is from the same fabric. His shirt has felt cuffs and a hand cut logo made from felt. The belt is yellow flannel, the shorts are modified gym shorts, the tights are gray leggings. His boot tops are stiffened felt.

*Everything for the above costumes were hand sewn without a pattern of any kind. I just went from the pictures of the old television program.

The Penguin and Catwoman are made up mostly of things we had around the house left from old costumes. I painted the top hat and bow tie purple. The sequined eye mask was hot glued to an old pair of glasses so I could see. 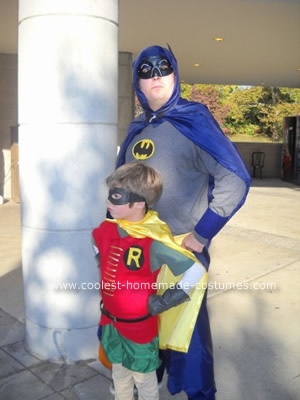 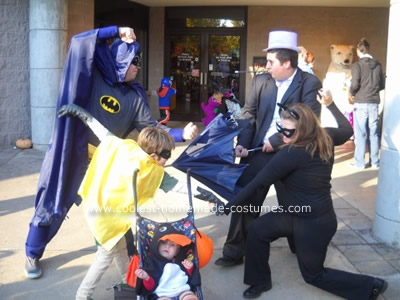 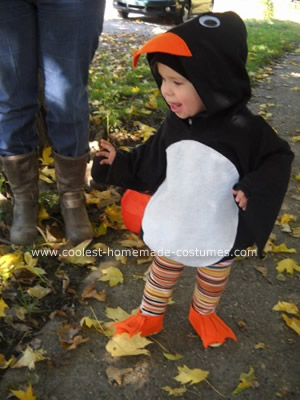 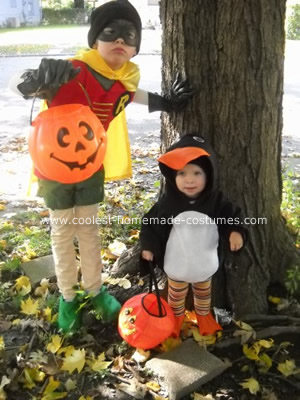