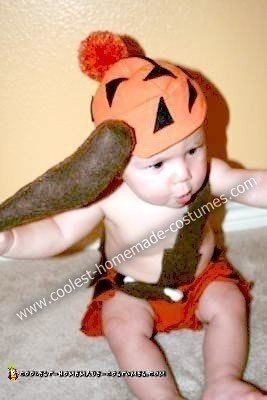 My son has had the nickname Bamm Bamm since he was born. Both my husband and I are not very big so when my son was born almost nine pounds and remained in the 95% of his age it didn’t take long for him to acquire his nickname. With his adventurous attitude and blond hair there was no question as to what he would be for his first Halloween!

I just started sewing when I became pregnant so I knew this Homemade Bamm Bamm Baby Costume would have to be as simple as possible. All I needed was a pair of orange shorts, an orange beanie, black felt, 1/2 yard of brown faux short fur fabric, a small toy dog bone, stuffing, glue gun and a sewing machine. I purchased a pair of orange shorts (on clearance from summer) and cut the bottoms to make it zigzagged. I cut flap of the beanie leaving only enough to have a brim. I then cut out triangles and sewed them on the shorts only. Due to a time crunch I had to hot glue the triangles on the cap. I found a pom pom hair tie at a children’s clothing store that I attached to the inside of his cap by cutting a hole and attaching it with hot glue. His sash is made out of brown fabric that is cut to look exactly like the cartoon. I cut two slits to insert the bone and glued the front to the shorts.

I sewed a button to the back of the fabric to attach to the shorts for easy access to his diaper. For the club, I simply enlarged a picture of Bamm Bamm’s club from the Internet, traced, cut, stuffed and sewed it. If you look closely I even sewed the swirl marks on the club to make it look like wood! Some neutral thermals to put under it when it got cold worked perfect.

All together his Homemade Bamm Bamm Baby Costume cost under $15 and a whole lot of love! 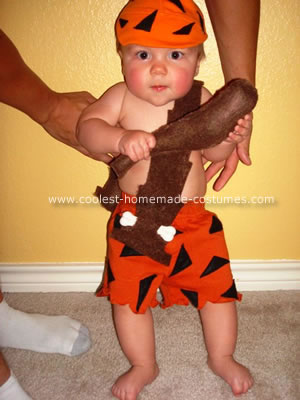 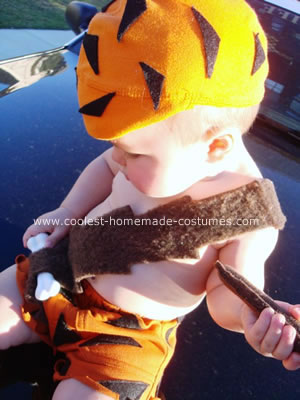