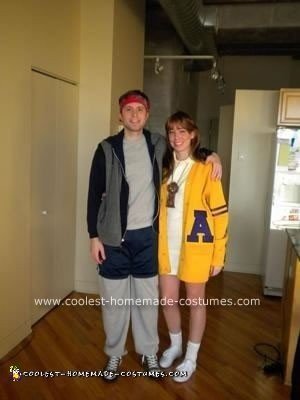 This Andy and Brandon from the Goonies Couple costume is actually costumes that we made last year, but I thought the pic would be a nice addition to your collection.

Brandon’s costume was easy to assemble. It was a sweatsuit with the arms cut off, another hooded sweatshirt, shorts, and then a sleeveless fleece. He wore the bandanna around his head.

For Andy’s costume, I bought a white tennis skirt, a yellow Polo shirt, a cream sweater vest, white socks and shoes. I found an old Letterman’s sweater, and then called a shop in Astoria, OR (the town the movie took place) and had them make me a purple “A”. I then had this sewn on the sweater along with 2 purple ribbons on the sleeve. I topped off the costume with a long/red wig.

I also created One Eyed Willie’s Copper Bones piece and wore it around my neck on a string . This was made of clay and painted a bronze color. I wish I had a closeup of this piece, but I don’t think we took one.