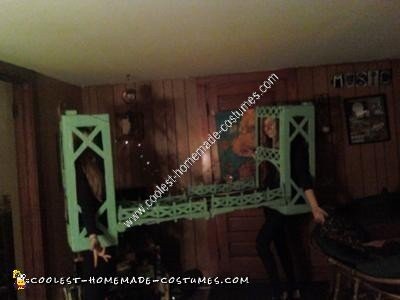 Every year since we were born we have traveled from Hamburg NY to Alexandria Bay NY for family vacations. This past year we decided to walk across the 1000 Islands Bridge that crosses over the St. Lawrence River. While on the bridge we realized a great 2 person costume – to create a homemade 1000 Islands Bridge couple costume. We wanted to make it as real as possible so we took as many pictures of the bridge at all different angles, as we could. That was the easy part; the construction of the bridge costumes is another story.

First we had to find the PERFECT boxes. This was a little bit difficult because you need to find a box that’s sturdy, and the right size. We finally found some empty chair boxes at our local hardware store that were perfect. While we were there we picked up some other supplies we knew we would need. Here are the list of supplies we picked up there: 1 quart of SeaFoam Green paint, 2 razor knives, 1 roll of duct tape, 2 cardboard boxes, loose Styrofoam, Black spray paint, Glow in the dark spray paint, Batteries, Electrical Tape, Tongue Depressors, Garden Twine, 10 Bulb Battery Operated String Lights, and Yard Sticks.

Our next step was to start making measurements compared to the pictures that we had of the actual bridges. We wanted to make them look as real as possible so we tried not to leave any design aspect of the bridge out. Once we had the lines drawn on the boxes we knew what we had to cut and got to work! After that the fun begins.

Now we painted and started constructing the road that would connect our bridges together. We pretty much made it look as much like a road as we thought. This included fake cars and double yellow lines. Then we added some twine which we thought would serve as the suspension wire. We also chose to completely spray them with glow in the dark spray paint so they would glow at night. It actually worked and looked awesome.

Then we connected the lights, touched up some paint and voila! Don’t be fooled, it’s not as easy as we make it sound. The whole homemade 1000 Islands Bridge couple costume in total took us about 2 days totaling around 20 hours. Completely worth it though! It was a huge hit everywhere we went! 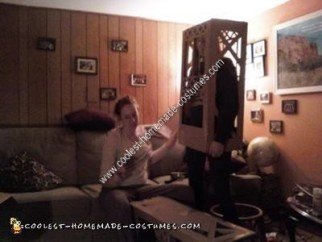 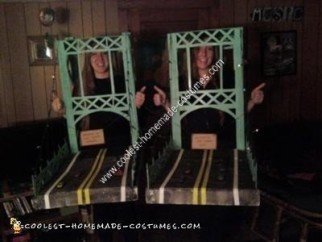 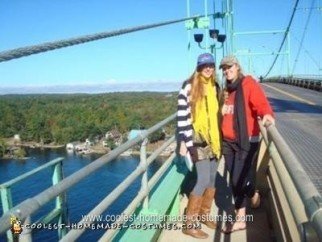