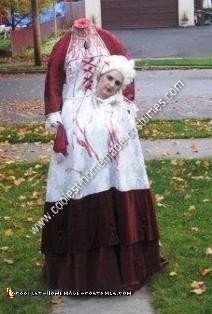 I was thinking of making a costume that would be worthy of Marie Antoinette when it occurred to me that headless would be ultimately frightening and shocking. I searched for ideas on how to make a headless costume and found many sites that talked about sculpting a bust from clay but I am not that talented; nor did I have the time or the money.

I found a site that said duct tape was a great way to start the “dummy”. So, I purchased a roll of duct tape, found an old shirt and had my mom start wrapping me up. When that was finished, I stuffed the dummy with newspaper, placed it on a dress mannequin, and covered it with Papier-mâché. I used three layers of Papier-mâché, allowing time to dry in between.

To cover the newspaper I discovered a site that said a product called “Gesso” works best. I coated the dummy with 2-3 coats of the Gesso, again allowing time to dry in between. This formed a great surface for painting and a little more solidity. I painted the dummy so it looked like “dead” using a mixture of gray and antique white acrylic paint adding a few drops of red food coloring.

To make the neck, I used a small coffee can with a lid. I punched a hole in the lid to make the “windpipe” (PVC pipe), stuffed the can with plastic bags to keep the PVC pipe straight, and inserted the can through the top of the neck, leaving about an inch of the dummy above the lid of the can. I then shredded some paper towels, covered them with Gesso and let it dry. I painted the neck with glossy red, acrylic paint and a little fake blood and poured fake blood all over the front of the dress.

I purchased a dress, a couple of curtain valances, a queen-sized flat sheet, and a queen-sized bed skirt from second hand stores. When the dummy was prepped and dried, I pinned the dress on, added the valance around the shoulders to make it look like a top, and then tore apart the bedskirt, using only the “velvet” to add some length to the bottom of the dress. All of the skirting is hand stitched since it was too thick for my sewing machine. I added some cording and bows to the front of the dress and around the top, some lace to the sleeves, and made a handkerchief out of left over materials, for detail. I also created an underskirt from an old slip and the flat sheet, adding the second valance to the bottom of the slip.

To make the arms, I stuffed a pair of gloves with pillow stuffing until they looked like real hands. I added a ring to the hand with the handkerchief, sewing it on so as not to lose it. I left the left arm flexible in order to hold my head.

In order to appear like I am carrying my head, I used a seam ripper to open up the seam under the left arm of the dummy. This worked well because the dress can then be safety pinned from the inside and the hole disappears. I attached a piece of elastic to the left hand of the dummy to keep the hand securely under my chin. I opened a seam a on each side of the dress, just big enough for my hands to fit, to allow the costume to be functional while out and at work. This was a life saver but freaked people out, too.

The hardest part was trying to figure out how to have the dummy over my head and secure. Using an old backpack and some creativity, I ran two wooden dowels inside the dummy, screwing the dummy to the top of the dowels. I secured the dowels in a couple of places with more screws and more duct tape. The whole contraption then had to go over my head.

I added a couple of necklaces, a wig and some make up and, voile!. My Headless Marie Antoinette Unique Halloween Costume Idea got lots of compliments! 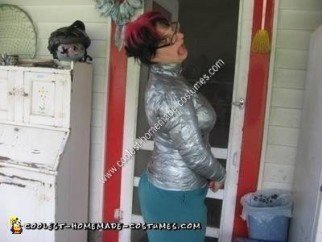 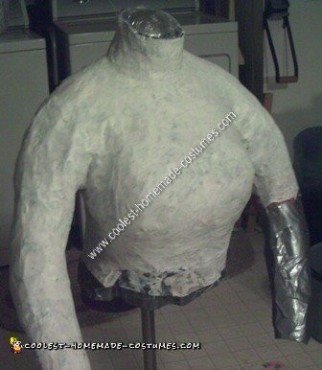 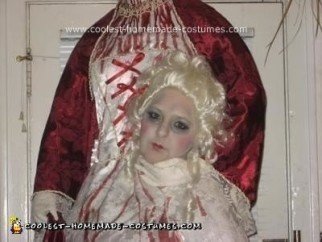