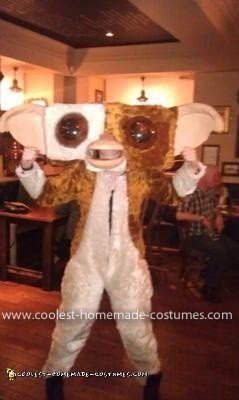 All I used to make Gizmo was:

– Foam I already had from a previous costume I had made, it can be bought online in any size and shape you require.

– A glue gun to glue all the strips of foam together in a cuboid shape and also the mouth. I originally made the mouth closed but realized I couldn’t see right out the eyes so then had to change it to an open mouth.

– Chicken wire to create the shape of the ears

– Paper mache for the ears, which I then applied liquid latex to create the rubber effect

– The eyes were bought online from a website specializing in packaging for sweets. It was a plastic sphere made to hold sweets that could be twisted apart… creating the correct eye shapes I needed. I put cellophane in the eyes so I could see through them when they were hot glued into the sockets I made in the head.

– The fur was from a local haberdashery which cost £8.99 per square meter. This was glued onto the head using adhesive spray in a can, I also glued it onto a ‘onesie’ (all in one bed suit) using the spray, then stitching.

– The nose was made from Fimo, clay you put in the oven to harden.

Because the head was made heavier at the front because of the weight of the eyes and mouth, I had to put weights in the back of the head to balance it out as the head kept falling forward so I couldn’t see.

I had an awesome time going out clubbing with my Gizmo costume, loving all the compliments, however it wasn’t the smartest idea since I had to stay in the same place all night because I took up so much room, it was so worth it though :)

I hope my homemade Gizmo costume helps people create their own Gizmo :), there aren’t enough in the world! 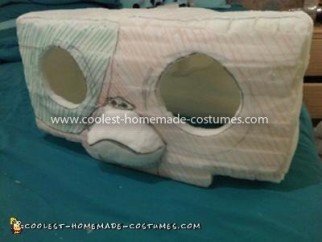 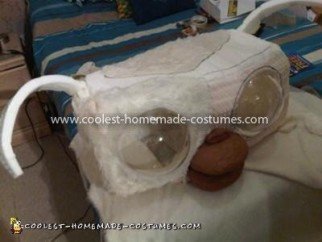 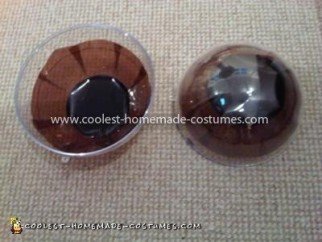