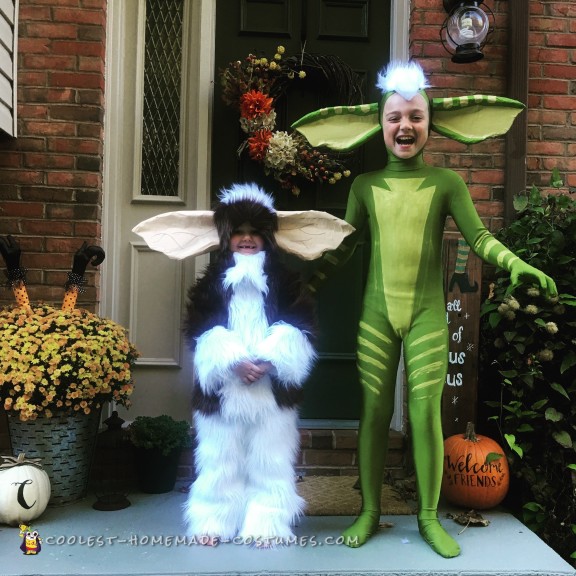 My daughter (Gizmo) who is 4-years-old LOVES the Gremlins. She carries around a Gizmo doll everywhere she goes. Her brother, who is 9, decided to make his sister a happy camper this year and while she dressed in a Gizmo costume, he dressed up in a Stripe costume.

Making the Gizmo and Stripe Costumes

Gizmo is made from brown and white fur. I used a pattern used for the Wizard of Oz lion costume and modified it as a Gremlin. The fur was a MESS to sew, but I made it through. The Stripe costume is a green skin suit, and I hand painted the markings on it.

Both sets of ears are paper mache made and formed with cardboard, newspaper, expand foam (that I carved to shape), and Modge Podge. Then I simply painted the ears to match each costume. I took a strip of leftover white fur from Gizmo and gave Stripe a mohawk. Stripe’s ears and mohawk are glued to a headband.

Everyone absolutely loved these costumes! Let’s face it, everyone loves a good retro styled costume. They just do not make movies like they used to! And who doesn’t love a cute little Gizmo?

I have thought and brainstormed about these costumes for months! My kids are so happy with them, and that’s what matters most to me. I hope my kids look back and think “my mom was awesome!”

Their memories are what matter to me the most! Thank you for giving me the opportunity to show off my little Gremlins that I worked so hard on.

Don’t forget if you see these two out after midnight, do not feed them or get them wet! Especially the little fuzzy one!