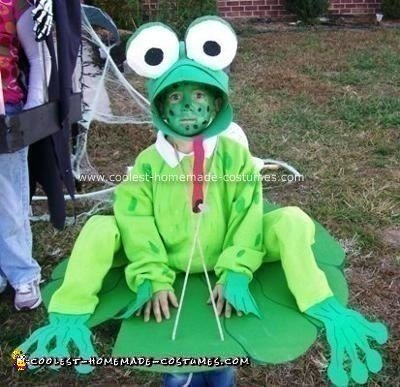 My son loves frogs. This year he wanted to be a “Cool” frog. So I started working on his costume. First I made the Lilly pad from a piece of cardboard (found the cardboard at a furniture store). I cut it out and attached the rope. I bought two sweatshirts at a thrift store. Cut the arms off of one. Stuffed them with paper and then glued them to the lily pad. I then used foam craft paper and cut out two “hands” and two feet. I glued the hands to the sweat shirt he would wear and the feet to the arms on the lily pad.

I then took the foam paper and shaped a head (trial and error). I used a stapler to fasten it together. Just make sure you turn the stapler so the sharp edges of the staples face out. I cut a rectangular piece of Styrofoam in two and used a kitchen knife to carve it down into two eyes. I painted them and glued them on the head. (Careful a high temp hot glue gun melts Styrofoam!)

Final touches included painting his face green, adding spots to his “body” with a permanent marker and finally adding a tongue with a fly on the end made of the same foam paper.