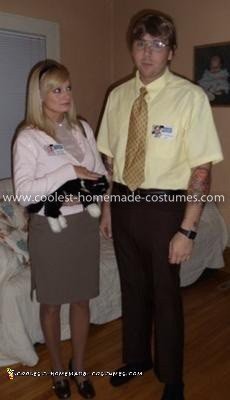 This year we had decided to go as Dwight and Angela from the hit TV show The Office. I found clothes to be Angela at my local Goodwill. It wasn’t hard to find stuffy grandma clothes there, lol! And already had the stuffed cat to tote around (since Angela is obsessed with her cats).

Dwight’s outfit was also found at a thrift store. We spent the most on the glasses which we took the lenses out of and the signature calculator watch which we found at Walmart. We hadn’t even planned on the watch but after stumbling upon it at Walmart, we couldn’t resist!

We topped Dwight off with a wig which we customized as best we could to try and achieve the Dwight haircut. All items cost us under 30 bucks. I added special touches by creating Dunder-Mifflin names tags with our pictures on them so wear around as well. All in all everyone loved our Dwight and Angela from The Office Couple Costume and we were immediately recognizable. :) 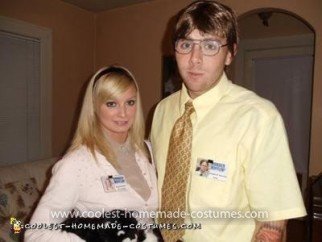