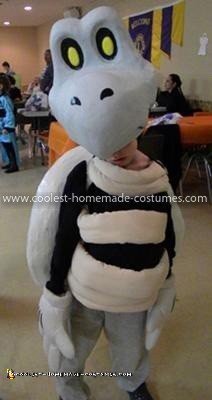 What we have here is Dry Bones from the Mario games. Last year right after Halloween, my son decided he wanted to be Dry Bones and he stuck with it all year long. I have always made all of his costumes, so this year was not going to be any exception. Plus I don’t think you can buy a Dry Bones costume like you can with a lot of the other Mario characters.

My husband and I worked together and made his Homemade Dry Bones Costume with Styrofoam, paper mache, bondo, paint, and fabric material. First we carved the head and the shell out of two different types of foam, one a basic Styrofoam and the other and spray foam that requires dry time. For the head we put all the details in the foam, like eyes, teeth, and the upper jaw line.

The shell we formed the dome of the shell and the outer lip. Once we had the shapes we put paper mache on and let the two pieces dry. Once they dried for about 24 hours we put bondo on the head to give it a more realistic bone texture, the shell we did not bondo.

When the bondo dried we had to sand down the entire head and give it a smooth surface. After that both pieces were ready for paint. We took a light gray for the head and dome of the shell. We accented both pieces with black for the nostrils, part of the eyes (and yellow for the other part), and spaces between the shell pieces. The outer ring of the shell we painted white.

During some of the many drying times we had I took a plain black sweat shirt and sewed and large pocket on the inside of the stomach and stuffed with batting. Once it was stuffed I sewed the bottom shut, it gave him the round belly look that Dry Bones has. I then sewed the flesh colored bands that goes around the stomach. Each one of those had quilt batting inside for a rounder look.

The pants, gloves, and shoes were items we had in house already. After the head and shell were dry we attached an elastic strap to the head, canvas straps to the shell and Velcro straps to the sweat shirt. The canvas straps were used like backpack straps, you slipped your arms through and wore them on your shoulders. The Velcro straps helped keep the shell on the back and in place.

The Homemade Dry Bones Costume probably took 10 to 12 hours to make. I loved the final outcome and he looked so good in it. 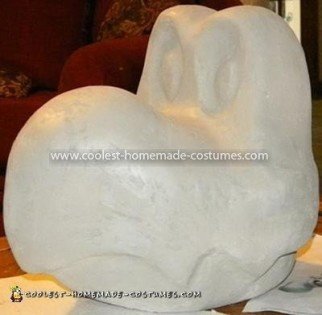 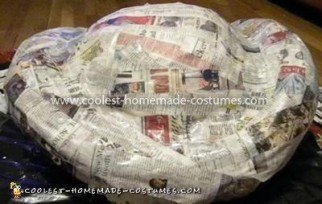