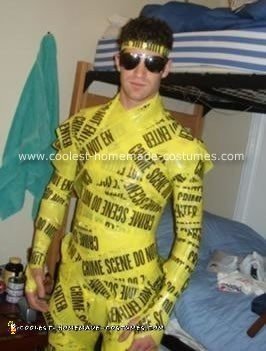 I got the idea for my “Crime Scene” costume when I was watching CSI one day. It was a few days before Halloween, and all my friends were being ghosts, goblins, vampires… typical costumes. I wanted something extravagant and attention-grabbing, yet creative and new. While watching CSI, I saw one of the main characters fall through yellow crime scene tape and tangle her leg in it.

I thought of how great an idea it would be to do just that. I went out and bought a roll of yellow “Crime Scene: Do Not Enter” tape. It was surprisingly more challenging than I had thought. I was wearing only basketball shorts. I had started with one foot, worked my way up one leg, wrapped my waist, went down the other leg to my foot, and cut the tape. I had started again at my waist, and wrapped my torso, one arm, my neck, then my other arm. After one layer, I rewrapped my body in a second layer. Using about two feet of tape that remained as left-over, I created a headband to go with the ‘police-style’ aviator sunglasses I wore. In total I used about 3 rolls of scotch tape, a few pieces of duct tape where the tape was cut and attached, one 1 roll of crime scene tape, and aviator sunglasses.

Taking about two hours to use up the entire roll, I had to use pieces of scotch tape every couple wraps to properly secure the crime scene tape to my skin, and to other parts of crime scene tape. I cut a tiny slit at my side so i could have access to a pocket in my shorts, where I kept my cell phone, ID and 20 dollars just in case.

In total I spent less than 20 dollars on my Crime Scene costume. It was a HIT at the party I went to. I made many friends that night and could tell my costume was what everyone was talking about while I was there. Even if you are just going trick-or-treating, this bright costume will keep you bright and safe as you roam the streets in the dark! I would recommend this costume to everyone that is looking for something original, loud, and fun!