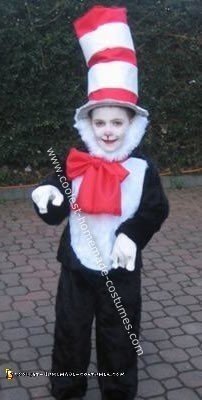 This Cat in the Hat Costume was for world book day for my 6 year old son. He wanted something different and found a picture of a small child wearing something similar and we worked from that. As he was going to be wearing the costume all day we did not want an ‘all in one’ costume.

We started with a pattern for a pair of pyjamas in order to get a two piece costume. The costume was made of fur. We made the paws using a pair of white cotton gloves and then put elastic through from one glove to the other so that they stayed on. The hat was made from a plastic top hat and felt, this was quite difficult. We filled the hat top with shredded paper and bubble wrap as we tried to keep in light in weight.

We added an elastic chin strap and covered it with fur so that it made his face look furry and helped to hide ‘human’ ears. The tail was quite heavy, it was made on a wirebase and then wrapped around fabric scraps to make it very padded. We made a fur tail casing and pulled that over the top. Where the tail joined the body we made a loop and threaded a belt through, this enabled my son to remove the tail at playtime (and when he couldn’t sit down!!), the belt could not be seen as it was just under the tunic.

To finish off we painted his face white and tied an oversized red bow round his neck. The funny thing about my son choosing this as his costume is that he is terrified of Cat in the Hat, it only has to be mentioned in the house and runs off! 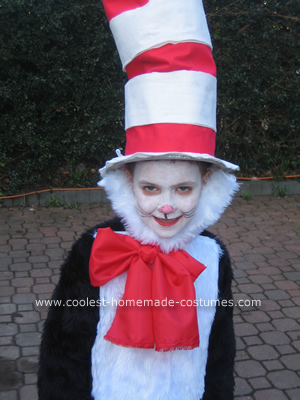 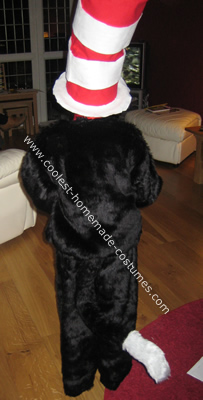