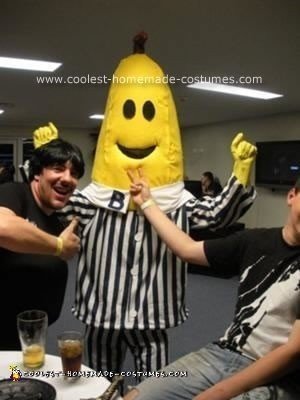 I had a costume party coming up for my work Christmas party and wanted to be the best dressed there so I decided to put together a Bananas in Pyjamas costume.

The ‘head’ of the costume was made with cardboard rolled into a tube. A balloon was then blown up and put in one end. Paper mache was applied to the whole thing to give it some strength. The best glue to use is wallpaper glue, can be found at hardware store.

To squish the mask, we cut slits in the sides and over lapped it a bit to give it more of a banana shape. Soft cotton stuff, like what stuffs in teddy bears and pillows was wrapped around and glued down, followed by yellow felt. Black felt eyes were applied. A mouth was cut out and then a piece of black material was glued from the black, which when close enough was able to see through.

A long white length of material glued around the edge with B1 on the front For the ‘stalk’ on the top, put cardboard tube (toilet roll) through another one and paint brown will do. Then jam that in the balloon part of the paper mache.

The pajamas were cut out of stripy material, just placed over clothes that already fit me and cut it out twice and sewed together. To give hoop look of the bottom part of shirt, Styrofoam tubing was threaded in.

I used yellow rubber gloves and some white shoes to top it off and you will be the life of the party!

Well I was, and got a bucket of alcohol for the effort!