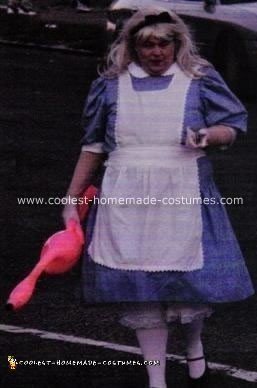 Once upon a time, there was a 47-year-old man who wanted to have some fun for Halloween. So, on a whim and a prayer, he decided to dress up as Alice in Wonderland. He had some help from his mother and because the poor sewing machine broke down, she had to hand sew this blue dress and apron.

Meanwhile, there were some internet finds for the rather large (size 12) Mary Jane shoes, bloomers, blond wig, headband and bow, and an unseen crinoline underskirt as well.

For the last two years, his costume was fun to wear looking like she had burst from the White Rabbit’s house after eating one of those cookies, plus the handing out of bottles of juice with the words “Drink Me” labled on them around the corner from a haunted porch that was done by some crazy (in a good way) neighbors.

The moral of the story, always have fun every year and be good to the neighbors.