My ten year old son… always wanting to be a Halloween Character that’s hard to find! One year Link from The Legend of Zelda, Luigi from Mario Brothers … to sum it up, he loves his video games. So, guess what? That means Mom (Me!) is always on the hunt for the perfect Halloween Costume.

Now, it seems my gift is not of sewing but of singing, so we usually have Grandma make it. She’s quite the skilled seamstress, and has been sewing wonders since I was a child. When was that you ask? Oh… a lady never tells her age. You’d think some of her sewing skills would have been passed on to me. Nope. Not so much.

This year, I was determined to make my sons costume, all by my little ole’ self. After ten years of Grandma doing it, this young lady wasn’t going to need her Mamma to make her kiddos costume this year!

There I went. On the hunt for ideas. Hooray! The thoughts, ideas and pictures all came together after much research. It may not have been an easy “together”, but together, nonetheless.

First item on the list was to find my starting base. A Royal Blue sweatshirt and sweatpants. Do you think any stores would carry this color? A boys size 12-14? Sure they would. As I started my hunt the beginning of September, I should have no problems, right? Wrong! No where was this particular color to be found. I see Navy Blue, Baby Blue, Turquoise Blue… no Royal Blue. Grrrr. There’s no way I’m going to be able to make this Costume without my Mamma if I have to actually sew something in full! As I wander through more stores, it dawned on me to look in the mens section. Surely I could alter a mens size small. There I was, looking at the shelves with all the sweatshirts and sweatpants. Navy Blue, Black, Grey, Red, Green….. *sigh*. Well, I guess I’d better call my Mamma…. wait… huh? Oooooo…. that’s a great thought popping in my head! Secretly, I decide I’m going to wander over to the girls section, and not tell my son a thing! Shhhhh!! Everyone knows all the sweatshirts and sweatpants look exactly alike. All Fruit of the Loom, no big deal. He’ll never know! Off, I go. As I stand in the girls section, my eyes behold Pink, Purple, Black, Green .. oh, and there’s that darned NAVY Blue again! GRRRRRR!!! Ok, I say to myself. One more stop in the women’s section. I start to look at the wall of shelves in the women’s section …. AND….. there it was!! Royal Blue!! Woo-Hoo!!!!! I secretly grab a size small sweatshirt, and a size small sweatpants! Shhhhhh!!! This is still top secret to my son. Not quite Ten Dollars spent, I’m a happy camper.

Next, to go to the Fabric Store and buy some Royal Blue Fleece, and some Off White Fleece. A little bit of Red, White and Yellow Felt. Then a bag of stuffing. No thread needed, as I had my colors at home. To what do my wondering eyes appear? All items 50% off that day! Everything I needed was perfectly in front of me. Less than Ten Dollars there too, Wow. Awesome.

Don’t forget the white gloves! A pair of lotion applying gloves at The Dollar Tree… and there they are!

My plans were to use the Sweatsuit as his base costume. I have an Animal Fleece Pattern Book, that I knew I could alternate the “Cat Hat” pattern, and put Sonic’s spikes on it. Luckily, I didn’t have to think that hard, because there was a Dinosaur Hat Pattern, that had Dino spikes. I decided I would enlarge these for Sonic’s spikes.

1) A perfect fit, was the size small Sweatshirt!

2) For the sweatpants, Five inches off the bottom, and Four inches taken from the waist.

3) The “Cat Hat.” I had to alter part of the hat, so it would have an open face, and the back would go down his neck. I  took a piece of paper, and held it against his face and sloppily traced a black line to where I’d want to make a new “front pattern” for this. Of course, I practiced a few times on paper, before my final draft to cut on the fabric! Perfect!

4) I enlarged the dino spikes Four inches in length, and made them a bit more pointy. Practicing again on paper, before I cut the fleece! I needed Eight of these… and not to forget Sonics tail, which made one more. I didn’t enlarge the dino spike for the tail.

5) I made a circular pattern for Sonic’s chest. I just taped four regular sheets of paper together, and cut it into the shape I wanted. All was great so far!

6) Here came the tricky part. Sewing! Wonderfully, my Sonic Hat turned our great. I also had to make some under-chin straps. I just cut some strips of fleece to the size I wanted, and sewed them on the inner sides of the hat. I sewed velcro onto those to attach. I sewed the chest circle onto the sweatshirt around the edges.

7) On to stuffing the spikes and tail! That was easy…

8) Now, here’s the fun part … or not so fun. Hand sewing the spikes on the costume. This took me a few days, as I had many needle injuries! Why isn’t there thimbles for the fingers you DO poke with a needle?

9) I found a picture online of how to make the Sonic boot shoe covers. After measuring my sons giant foot, I had my measurements for Sonic Boots. These sewed up just fine.

10 … And ta-da!! Sonic the Hedgehog is complete! Don’t forget to add some white eyeshadow and black eyeliner to your face to complete the look.

My son Keegan, aka Sonic the Hedgehog was a Halloween hit! If I had a dollar for every compliment he got, I would receive back the money it took to make the costume, and much more! He even checked out his Sonic speed, by running fast! This was one of the best costumes out there, in my not-so humble opinion, and all under $20.00! Not to mention, perfect for a chilly Halloween night. I mean, who wants to wear a coat over their costume? No one said yes ever! Halloween was a happy day for this family, all around.  :) 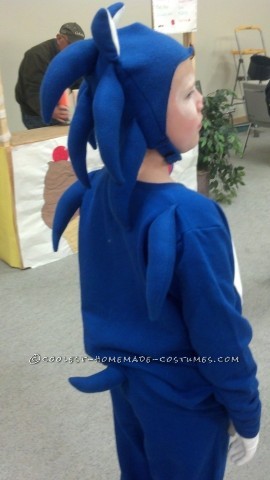 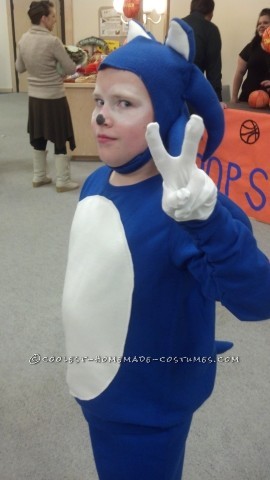